Avery The Beast Batch No. 11 Debuts This Month 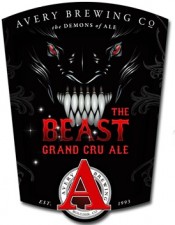 Boulder, CO – Batch No. 11 of Avery Brewing Company’s The Beast is loose and coming to seduce your soul and dominate your senses.

Released each August, this Belgian-style Grand Cru features 6 malts, 6 hops, and 6 brewing sugars. The Beast is unfiltered, adding to its powerful, dark and complicated flavor profile. First released in 2004, it was the first of the Demons of Ale Series and marks one of the brewery’s first forays into making super high gravity beers.

“This is a beautiful beer, even if it is a bit perilous. It was my intent to create something more than “beer.” I wanted something that bordered on liqueur, something rummy or maybe like Cognac,” said Adam Avery.

This was the first year since 2004 that The Beast broke the 18% ABV mark, making it one of the biggest beers the brewery has ever made.

“This year we made it the monster it is supposed to be. Most people think we are idiots for making a beer this huge, but our fans are up to the challenge and love it,” said Avery’s Director of Operations Steve Breezley.

The Beast will be released to select markets starting in the second week of August and will be available in single 12oz. bottles.  For more information, beer connoisseurs can check www.averybrewing.com or email [email protected].