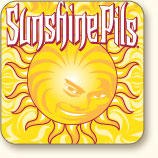 Taken from Tröegs Tales Newsletter , Tröegs fills us in on the return of Sunshine Pils as well as their ongoing Scratch Beer Series. Cheers!

The chilly weather we’re currently experiencing in Central PA won’t put a damper on the release of our spring and summer seasonal, Sunshine Pils. A crisp, refreshing European-style pilsner with a kicked-up hop character, Sunshine Pils won a gold medal at the 2012 Great American Beer Festival. Cases, six-packs, and single 12oz. bottles are currently available in our General Store, and cases have started shipping to retailers throughout our eight-state distribution footprint last week. Sunshine Pils is also included in our Anthology #1 sampler case, which is now available as well. Expect the draught version of Sunshine Pils to hit tap lines by mid-April.

Our bottle caps. Your imagination.

Many people have no idea what to do with a bottle cap once they open a beer. We had the same problem at Tröegs Brewery, so a few years ago we started a bottle cap art contest to cut down on the mess around the brewery. We are pleased to announce that the Art of Drinking Tröegs contest is back up and running in 2013! The rules are simple: make art using Tröegs bottle caps. Don’t limit your creativity. Your art can be flat, it can be 3-dimensional, it can be anything you envision and can make into a tangible piece of artwork (as long as you use Tröegs bottle caps). The grand prize winner will receive a $500 cash prize. Entries will be accepted until midnight on September 1, 2013. For more details, please click HERE.

Scratch #91 – Dunkel Lager – Another first in the Scratch series, this Dunkel Lager is based on a recipe by Tröegs brewer Jeff Campbell. A traditional Bavarian dark lager brewed with Chocolate and Munich malts and German noble hops, Scratch #91 is smooth, rich and complex, but comes without the heaviness of many other dark beer styles. Scratch #91 is slated for release on Thursday, April 4 in the Tasting Room. Availability: draft and growler fills only.