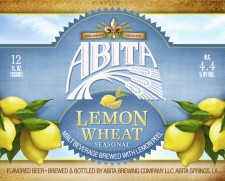 Abita Springs, LA – The Abita Brewing Company is proud to introduce Lemon Wheat as their new summertime seasonal brew. Lemon Wheat is a crisp, refreshing beer made with real lemon peel for a fresh citrus taste and aroma.

“Abita Lemon Wheat is a cool citrus brew created to beat the summer heat,” said David Blossman, President of the Abita Brewing Company. “Lemon Wheat is so refreshing because it’s brewed with lemon peel for a fresh citrus taste and aroma. It’s an unfiltered brew with a hazy golden color and is made with lager and wheat malts, Centennial hops and Biere de Garde yeast.”

Abita Strawberry & Lemon Wheat: Made For Each Other