(Inglewood, CA) –  Three Weavers Brewing Company announces the reinvention of one of their favorite seasonal beers: Return of Sassy has become Even Sassier in 2020. Even Sassier is now available in 4-packs of 16 oz. cans at the Inglewood taproom for local delivery or pickup, with limited distribution rolling out now. 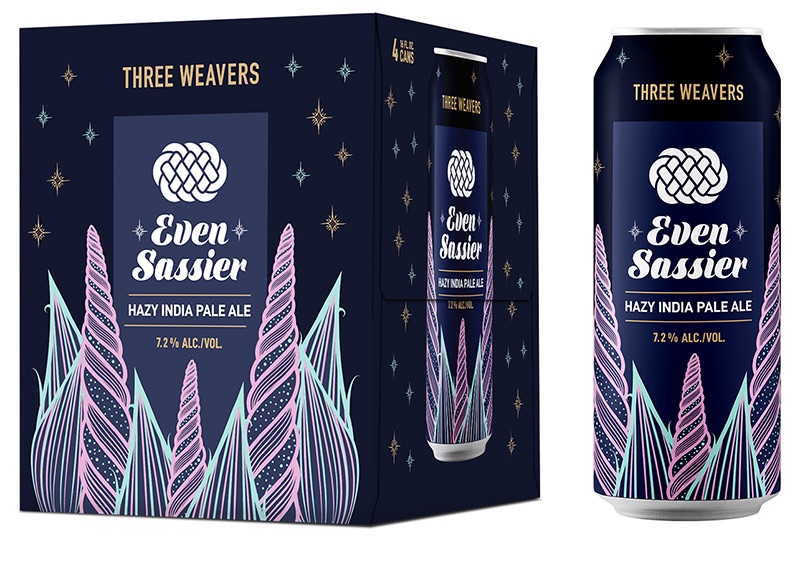 Return of Sassy, a Whimsical Rye IPA, is a longtime favorite among Three Weavers beers. This year, Three Weavers decided to craft a hazy version of the beloved brew, dubbed Even Sassier, and kick things up a notch by adding expressive yeast and aggressive hopping. Rye is incorporated into the malt bill to perfectly complement a citrusy, aromatic combination of hops.

Three Weavers Brewmaster Alexandra Nowell commented on the use of rye in Even Sassier: “It expresses itself as this extra added bonus malt flavor that’s hard to put your finger on.” She added, “You can expect aromas and flavors of passionfruit, guava, mango, pineapple and sun-ripened peaches. It’s juicy and tropical with a soft, pillowy finish.”

Even Sassier brings the sass to a new level. You can get your hands on Even Sassier, along with other Three Weavers limited releases and core favorites, via local delivery or pickup now on their newly redesigned website here. Look for Even Sassier at California’s premier beer sellers now. Contact Lauren Carroll at [email protected] with questions.

About Three Weavers
Three Weavers Brewing Company is an independent craft brewery with a mission to build a positive sense of community through the collective passion for craft beer. Founded by Lynne Weaver in 2013, Three Weavers is one of the largest independent craft breweries in Los Angeles County and currently expanding production and distribution on the West Coast. Led by award-winning Brewmaster, Alexandra Nowell, Three Weavers craft beers have received critical International acclaim, winning a World Beer Cup Gold Medal in 2016, a GABF Silver Medal in 2017, a European Beer Star Bronze in 2017, and the Australian International Beer Awards Best IPA and Champion International Beer in 2018. Three Weavers is proudly brewed in Inglewood, California.