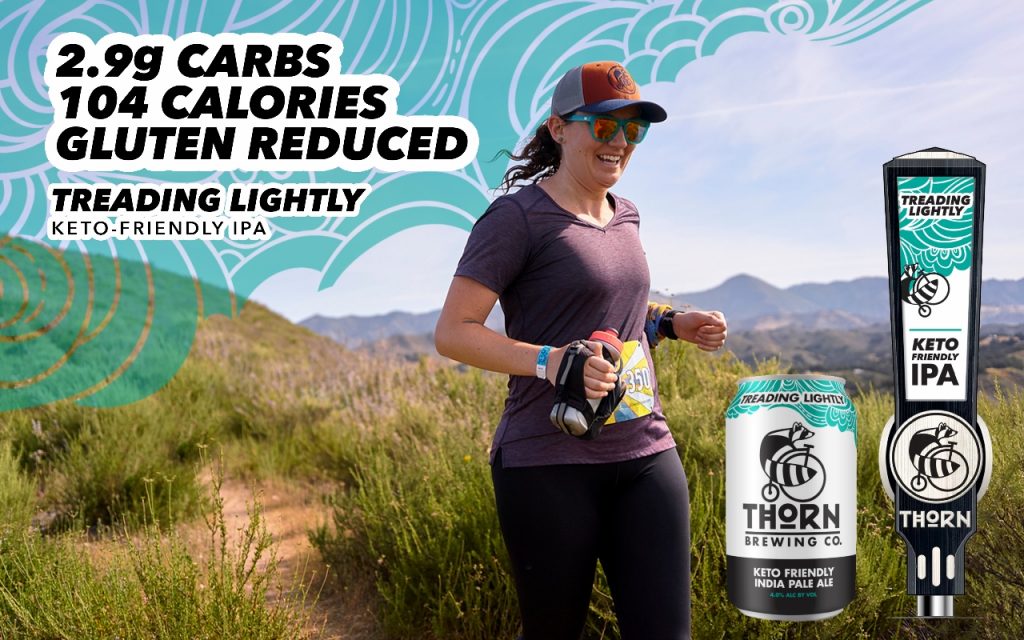 Treading Lightly is an IPA that’s both full of flavor and light in carbs. The secret is using amyloglucosidase enzymes which can be used to degrade starch polymers and maltose to glucose in the beer creating a low-carb beer with a decent ABV still. This IPA is bright, crisp and very dry. The Citra and Amarillo hops burst through your palette creating a beautiful session IPA that rings in at 104 calories for a 12 oz can and just 2.9 carbs while still maintaining a 4.5% ABV. As an added bonus, the beer is Gluten-Reduced making it easier for those who are sensitive to gluten. So far, people following low-carb diets like Keto have been thrilled about Treading Lightly.

Thorn Brewmaster, Eric O’Connor, shared this about the new beer, “If you do want a real tasting IPA that will help you stay within your low-carb or low-calorie diet, this beer could be for you. It’s also just a damn tasty beer for those not on a diet but looking for a lower ABV option that’s not a lager.”

With most low-carb beers on the market being lagers, Thorn hopes Treading Lightly will bring something new for beer drinkers who also are counting carbs or calories. This beer is now available in cans throughout San Diego County as well as on tap at Thorn taprooms, local bars, and restaurants.

About Thorn Brewing Co.
Thorn Brewing Co. started out in 2012 in North Park as Thorn Street Brewery where they became known as San Diego’s ultimate neighborhood brewery. Their Barrio Logan location opened in 2017 and produces their beer on a 30-barrel system, houses their canning line as well as a tasting room and events space. Thorn Mission Hills just opened up this past summer and is already becoming a local hangout featuring 12 rotating taps, beer-to-go, and skeeball.