(ORANGE COUNTY, CA) – On Saturday, Dec. 7 The Bruery will be releasing the 12 Days Collection box to the public on TheBruery.com and at both Tasting room locations in Placentia, CA and Anaheim, CA. On Saturday, Dec. 14th boxes will be available at The Bruery Store at Union Market in Washington, D.C. 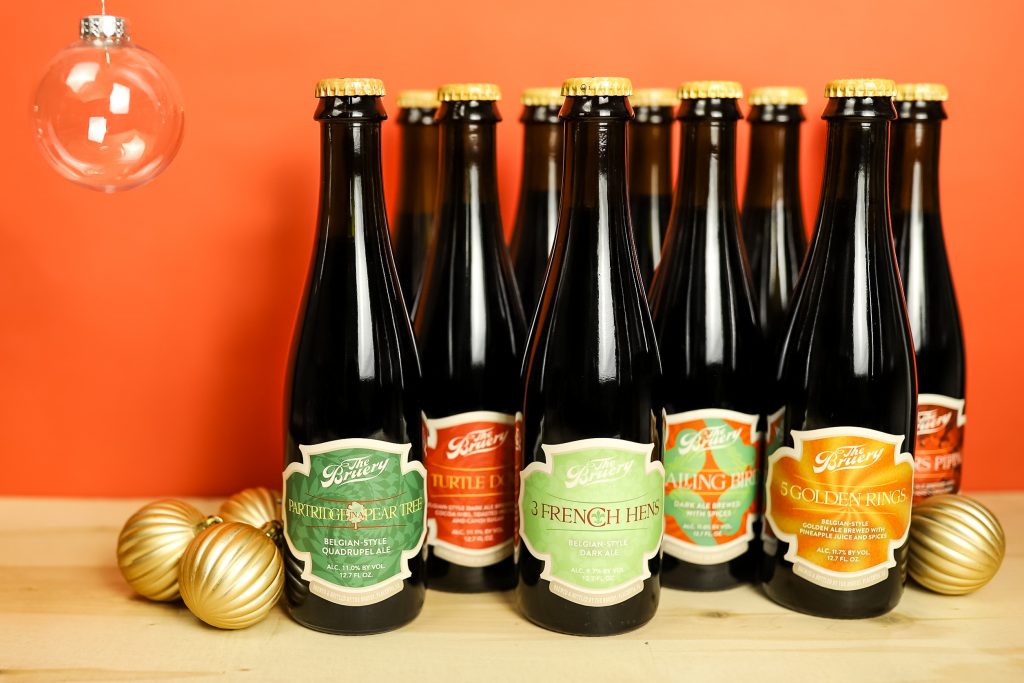 For over a decade, The Bruery has been releasing a yearly Christmas beer on theme with the 12 Days of Christmas tradition, with the name of each beer being on par with the popular song’s lyrics. “I love Christmas beers, and I couldn’t decide which style to go with, so I wanted to be able to brew one every year and not follow a specific recipe every year. So, my wife had the brilliant idea of doing the 12 Days of Christmas starting with A Partridge in a Pear Tree and ending with 12 Drummers Drumming,” says founder Patrick Rue. Each beer has a unique recipe, but all have a Belgian-inspired twist, as The Bruery is based on boundary-pushing innovation. Fans have been collecting these releases since the first one was unleashed way back in 2008. Now, fans get to enjoy rebrews of the beers they may be missing from their collection, or have the option to taste the originals and rebrews side by side.

Our team revisited the original recipes and found where the inspiration came from. These rebrews harness the essence of the original collection presented in a beautiful box. Around July, we started drilling down, and that’s where we started digging up ghosts and understanding where the inspiration came from around some of the early beers, and that’s what fueled this special box set,” says our Vice President of Brewing Operations, Darren Moser.

That’s not all; the 12 Days Collection is going on tour across the country. Full information can be found on our Facebook events page. Fans can try draft pours of all 12 beers along with other special pours at the following locations on Dec. 13:

The Bruery is a craft brewery located in Orange County, CA, that specializes in experimental and barrel-aged ales. Founded in 2008 by Patrick Rue, The Bruery produces over 50 different beers annually, with 15 seeing national distribution throughout their 24 state network of distributors. The Bruery also runs several beer clubs, including The Preservation Society ®, The Reserve Society ®, and The Hoarders Society ®.