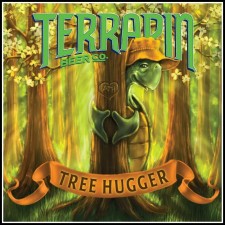 (ATHENS, Ga.) – Terrapin Beer Co. is thrilled to be awarded one of the most sought-after honors for outstanding brewmanship: Terrapin’s Tree Hugger has earned a bronze medal in the Altbier category from the European Beer Star 2013, Europe’s largest beer competition!

“This award is a particularly special thing for us,” explains Terrapin president John Cochran. “Tree Hugger is a fairly new beer that’s loosely modeled after a traditional German style; for it to get international recognition from the experts in Munich is wonderful!”

Tree Hugger, dubbed an “alt-centric ale” and weighing in at 5.1% ABV, is a March 2013 addition to Terrapin’s year-round line-up. Featuring an herbal-spicy hop aroma, notes of caramel nuttiness, a medium body, and a dry malty finish, this beer leans away from the company’s usual hop-heavy offerings.

This year, the competition was tough- a total of 1,512 beers from 40 countries participated, an increase of 11% over the 2012 competition! Judging took place on August 23. A committee consisting of 102 beer experts evaluated the entries during an all-day blind tasting held in the Doemens Brewing Academy in Gräfelfing. The prizes were awarded on September 18 during a ceremony held at the Drinktec in Munich.

At the European Beer Star, beers are evaluated solely based on sensory criteria that also apply to every beer drinker: appearance, aroma, flavor, and mouthfeel. The jury of brewmasters, beer sommeliers, and other selected beer experts sample the beers in a blind taste test. The taster is made aware of each beer’s style, but not the beer’s brand, brewer, or country of origin.

In 2004, in cooperation with the Association of Small and Independent Breweries in Europe, the European Beer Star Award was launched by the Private Brauereien. Its goal is to showcase and to honor the unique diversity of beer. At the European Beer Star, only beer styles that have their traditional roots in Europe are considered; any of the world’s breweries is eligible to participate. The Award especially values authentic, full-flavored, high-quality beers full of character. For the 51 different beer categories, only one each of gold, silver, and bronze medals is awarded; with over 1,000 entries vying for these Top-Three honors, the European Beer Star is one of the most competitive beer competitions in the world.

Terrapin Beer Co. is open to the public for tours every Wednesday, Thursday, Friday and Saturday night from 5:30 p.m. – 7:30 p.m. with live music and tastings. The brewery is located at 265 Newton Bridge Road in Athens, GA. The tours are an excellent opportunity to taste Terrapin’s full line of award winning beers at their freshest and to see the brewing process first hand. For more information visit the web site www.terrapinbeer.com or the Facebook page.