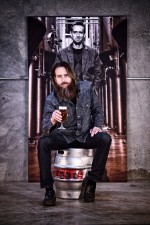 Escondido, CA – It takes a major cause for Stone Brewing Co. CEO & Co-founder Greg Koch to even consider chopping his lengthy locks and shaving that scruffy, now infamous beard. And we mean major. Even pleading from his significant other, family, friends and fellow Stone co-founder Steve Wagner couldn’t convince Koch that the stubble-gone-wild he’d been working on for two years was due for a trim. So what finally did the trick? Winning the San Diego Business Journal’s “San Diego’s Most Admired CEO” award? Nope. Opening the new Stone Brewing World Bistro & Gardens – Liberty Station in San Diego’s historic Naval Training Center redevelopment? Or opening another Stone Brewing Co. venue in Terminal 2 of San Diego International Airport? Nope. It was none other than Movember, the global men’s health charity encouraging men to grow and women to support the Mo (moustache) for 30 days in November. Through the power of the moustache, awareness and vital funds are raised in support of men’s health issues, specifically prostate and testicular cancer initiatives. Koch has been nominated as a Mo Bro spokesperson for the movement to help spread the gospel (as he’s known to do) about Movember and its campaign.

On November 1, Koch will participate in Movember’s “Shave the Date” by completely shaving his long, scraggly beard down to bare skin at a live, orchestrated event in San Diego. Or will he? Koch’s personal goal is to raise $25,000 through the “SHAVE GREG” campaign, though an absolute rock-bottom amount of $15,000 is required to make it happen. “No dough, me no Mo Bro,” grunted Koch gruffly in a manner suiting his current, uh, “look.” Donations are now being accepted through Koch’s fundraising page, MoBro.co/gregkochstonebrewingco.

“Twice in my life, I’ve shaved a goatee leaving a moustache, and both times I removed it the same day because it freaked me out when I looked in the mirror. I can’t imagine having one for a month,” said Koch. “My current beard is stately and reminiscent of our founding fathers. Yet if I raise enough money, I’m trading that stately look for a moustache that’ll probably be reminiscent of a bad 70s album cover. Sometimes I amaze even myself at the lengths I’ll go to, or cut, for charitable causes. Now that’s self-sacrifice on behalf of others! So, I’m calling for your support. Donate not for me, but for the cause. I’m just your humble servant.”

Shave The Date: Movember 1 is a day to shave down and get excited about the hirsute month ahead. This year, to celebrate the coming of Movember, hundreds of San Diegans will gather together at Quality Social in the San Diego Gaslamp District for an event that will bare it all. With Koch’s shave-down taking center stage, San Diegans wishing to participate will have the opportunity to register and have their own faces shaved clean, courtesy of Floyd’s Barber Shop, who will be onsite to professionally shave attendees free of charge. The Shave the Date event is free to attend, and all ages are welcome.