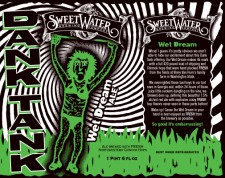 Atlanta, GA — SweetWater Brewery is excited to release “Wet Dream” our next batch from the Dank Tank series. A high gravity imperial red ale featuring 420 pounds of –fresh off the vine- Chinook Hops from Van Horn’s Farm in Washington State. These hops were freshly picked and immediately shipped overnight to the brewery and so they could be added into the brew within hours of being taken from the field.

Wet Dream features a full 420 pound load of fresh Chinook hops added to the 80 barrel batch brewed resulting in a staggering 5 pounds of hops per barrel. SweetWater’s Brewmaster Mark Medlin worked closely with the hop farmer so that this brew would be ready to go as soon as the hops hit their peak at harvest. The fresh wet hops define this beautiful red ale with explosive piney hop flavors and a herbal aroma. Wet Dream is part of SweetWater’s Dank Tank — a series of small-batch, experimental brews. This release we be available at the end of September for tasting at the brewery, and will be available on draft at selected restaurants and in 22oz bottles in selected retailers the first week of October. This will likely sell out before the end of October since it was such a limited run, to ensure that it is consumed as fresh from the brewery as possible.

“This brew was an opportunity to create a fresh hop experience and put something out there that shows people what to expect from a highly hopped brew whose hops, less than 24 hours off the vine, were literally overflowing the kettle” says Medlin “The Dank Tank series has kept things fun and interesting for everyone at the brewery”. The “Wet Dream” Fresh Hopped Ale will be available on draft in the brewery’s tasting room on September 30th and throughout metro Atlanta, and select location in the Southeast, on draft and in 22oz bottles the first week of October.

SweetWater Brewing Company, makers of 420 Extra Pale Ale and a host of tasty brews, began its dream of free beer till their dying day in a seedy office park on the west side of Atlanta in 1996. Today, six years into a shiny new brewery in midtown Atlanta as the second largest craft brewer in the Southeast, SweetWater produces four year-round beers; 420 Extra Pale Ale, Blue, IPA, and Georgia Brown, as well as a slew of Catch and Release seasonals, and the Dank Tank series of experimental beers. Tours of the brewery on Wednesday, Thursday, and Friday from 5:30 – 7:30pm and Saturday from 2:30 – 4:30. For more info give us a call at 404-691-ALES or visit www.sweetwaterbrew.com