(ATLANTA,GA) – The brewers at SweetWater fired up the skillet to 420º, tossed in a sizzling malt concoction of 2-row, Wheat, Pale Chocolate, Cara-Brown, and Midnight Wheat, then added in a hefty dose of hop hash and other dank-ish-ish-ish fixin’s to create their new fall catch-and-release seasonal, Hash Brown.   Not your typical brown ale, this brew’s resiny, citrusy hops spice up this roasty and rich, lighter bodied brown.   Lighting up shelves starting August 18, Hash Brown is SweetWater’s second hash brew, joining Hop Hash, a year-round brand released in late 2014. 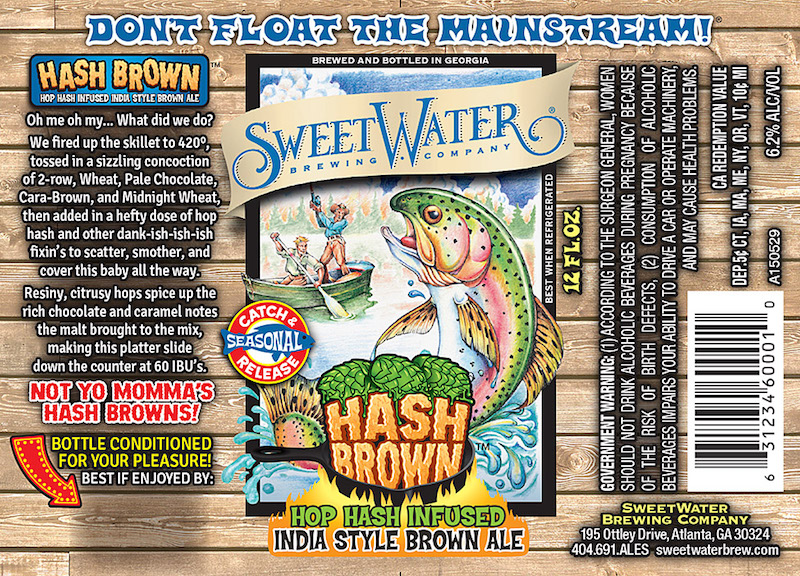 For both Hash Brown and their acclaimed Hop Hash, the brewers work with SweetWater’s hop suppliers to dig deep into the pelletizers, scrap ‘em clean, and gather bricks of the leftover pure hop lupulin goodness.  They are harvesting a very concentrated form of hop resin, also known as hash, to cook up this growing series of brews that deliver a pungent punch to the palate.  “Hash is concentrated, danky deliciousness,” explains SweetWater’s head brewer Nick Nock.  “It’s the leftover resin that escaped from the hop cones going through the pelletizer, which is all too often ignored and left unused.   But we’ve created some killer brew recipes using this sticky and potent by-product; it’s been a blast to experiment with.”

While Hop Hash is a double IPA with a big ABV to match the heavy hoppiness, Hash Brown delivers a huge hop forward you’d expect from the aroma, but with a lighter malt bill and 6.2% ABV — this is one that’s easy to go back to for seconds and thirds!  Almost burgundy in color with a creamy head, this attractive ale comes in at 60 IBUs.

Hash Brown will be available in 6-packs of 12 oz. bottles, in cans available exclusively within the fall TackleBox variety 12- pack, and on draft through the fall season.   For details on Hop Hash and all of SweetWater’s lip-smackin’ lineup, visit www.sweetwaterbrew.com.

ABOUT SWEETWATER BREWING CO.:   SweetWater Brewing Company is an Atlanta-based craft brewery living by the motto “Don’t Float the Mainstream!” The award-winning lineup of year-round beers includes SweetWater 420, IPA, Take Two Pils, Hop Hash, Blue, and Georgia Brown. SweetWater also features a catch and release series of beers available on a limited basis throughout the year including an experimental, one-time-only Dank Tank series and barrel-aged wild ales in the Cork & Cage series. SweetWater Brewery – located at 195 Ottley Drive in Atlanta – is open for tours every Wednesday, Thursday and Friday from 5:30 – 7:30 p.m. as well as Saturdays and Sundays from 2:30 – 4:30 p.m. For more information about SweetWater Brewing Company, please visit www.sweetwaterbrew.com. Follow SweetWater Brewing Company on Twitter/ Instagram @sweetwaterbrew, or become a fan on Facebook at facebook.com/sweetwaterbrew.