(Atlanta, GA) – SweetWater Brewing Company of Atlanta, GA updates us on their 2013 performance, their new canning line, some new beers and celebrating their 17th Anniversary. Cheers!

Turns out we managed to sell some beer last year…in-between drinkin’ it. We ended up cranking out 144,000 barrels in 2013 (that’s more than 21 million pints, people). Our most popular seller is still (shocker) 420, but looks like folks love a little variety in your life too since Tackle Box went up a whoppin’ 215%. Our new Money Man says that’s a lot. Thanks for all of your hard work producing, packaging and peddling our brews. Keep doin’ what ya do!

We’re Getting a New Pair of Cans

We got a care package from our German friends at Krones this week that brings us one step closer to beaches and pools everywhere – our can filler! This monster mamajammer is gonna be a bitch to install, but once she’s up and running we’ll be slingin our heady brews in aluminum. Goal is to have 420 and IPA rollin by mid-March, so fingers crossed!

Our collaboration brew with The Giving Kitchen has been a huge hit, helping raise a ton of money for their awesome cause. Doesn’t hurt it’s mighty tasty too – a double IPA brewed with two helpings of juniper berries and a variety of 10 different malts and hops. It pairs well with most dishes, and chefs all over town are whippin’ up special servings featuring the beer. 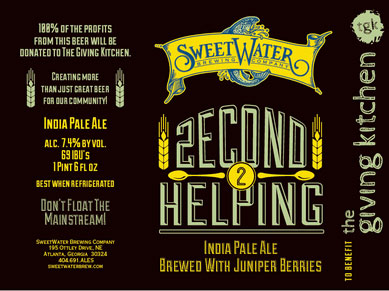 If you haven’t tried it yet, make plans to find it soon – this badass brew probably won’t be around much longer since it’s a limited run.

We’re doin’ things a little different for our anniversary ale this year by unleashing a big-ass 9% ABV Saison. If you’re not familiar with the style, Saisons are known as farmhouse ales because they were originally brewed in barns for farm hands. The nature of brewin’ outdoors means some funky yeast can fall in, so prepare for this one to be a little more complex than you’re used to. Of course we put our own SweetWater twist on the style and hopped the manure out of it. Look for more details on this sucker as we get a little closer to our birthday party.

Y’all ready? We’re ripping the doors off the brewery and cracking open the cellar to celebrate another year of being older, wiser and of course much better looking!

This par-tay includes plenty of tasty samples (see below), live music from Like a Locomotive, a special souvenir anniversary pint glass, and loads of high fives! Plus we’ll have food trucks a plenty, but space at our party is limited so get your tix online pre-sale for only 12 bones, or roll the dice at the door for $17.

In the meantime, hop on over to the Facebook event RSVPs and check out who else you’ll meet there!