Atlanta, GA – There are few things better than a good brew, but there’s nothing better than a brew with benefits. SweetWater Brewery has once again partnered with The Giving Kitchen to serve up just that – Second Helping IPA. All profits on this beer from both SweetWater and United Distributors will be donated back to The Giving Kitchen, a local non-profit dedicated to assisting restaurant industry workers who have experienced unanticipated emergencies and hardships which grew out of a beyond-expectation response to the devastating cancer diagnosis received by beloved Atlanta chef, Ryan Hidinger, in December of 2012. 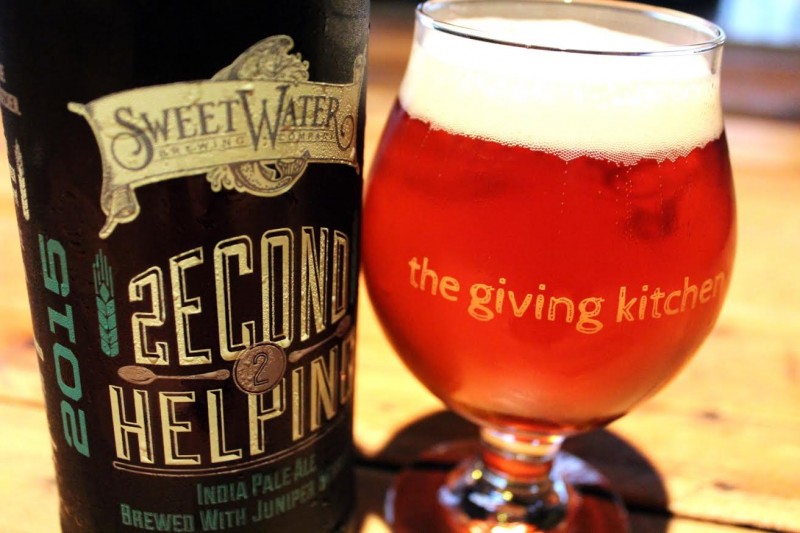 Originally brewed by Chef Hidinger and the team at SweetWater, Second Helping is an IPA brewed with juniper berries and the idea of savoring the moment. By drinking this beer, you are helping The Giving Kitchen provide peace of mind to cooks, servers and bartenders throughout metro Atlanta. In fact, Second Helping’s first go ‘round raised nearly $40,000 to directly support grants The Giving Kitchen offers to in-need community members.

”The Giving Kitchen would not exist without partners like SweetWater Brewery and United Distributors,” said Giving Kitchen Executive Director, Stephanie Galer. “Last year, our supporters allowed us to provide financial assistance to over 120 industry employees facing unanticipated crisis; workers like Carlin Guite who was unable to serve for over a year while she underwent treatment for breast cancer.”

“The outpouring of love and support we receive from Atlanta’s hospitality community blows us away every day,” said SweetWater Founder Freddy Bensch. “Here at SweetWater, we were moved by the opportunity to support our local food and beverage industry with such a fantastic brew. It’s an honor to participate in carrying on Ryan’s legacy and shining a big light onto The Giving Kitchen’s great deeds.”

Set for a short-run starting in mid-January, 22-oz bombers of the juniper IPA can be found throughout Metro Atlanta at participating accounts in addition to draft tap handles at select bars and restaurants. Second Helping is brewed with 2-row, Victory, Wheat, C30 and chocolate malts; and features five varieties of hops including Bravo, Centennial, Chinook, Simcoe and Amarillo. Juniper berries were added in the whirlpool and then steeped in the dry hop phase to pull piney, dry berry characteristics on the palate. This heaping helping serves up 7.4% ABV and 69 IBUs. SweetWater’s Atlanta area distributor, United Distributors, has once again joined the brewery in pledging to donate all profits directly back to The Giving Kitchen, and look for local retailers upping the ante as well by creating benefit events featuring Second Helping.

For more information on The Giving Kitchen and a list of events, please visit www.thegivingkitchen.org