Paso Robles, CA – Firestone Walker Brewing Company is set to release its first Proprietor’s Vintage Series beer of 2015 with the return of §ucaba – and Brewmaster Matt Brynildson is now spilling a few secrets on the tongue-twisting, barrel-aged barleywine that has been a brewery staple since 2006. 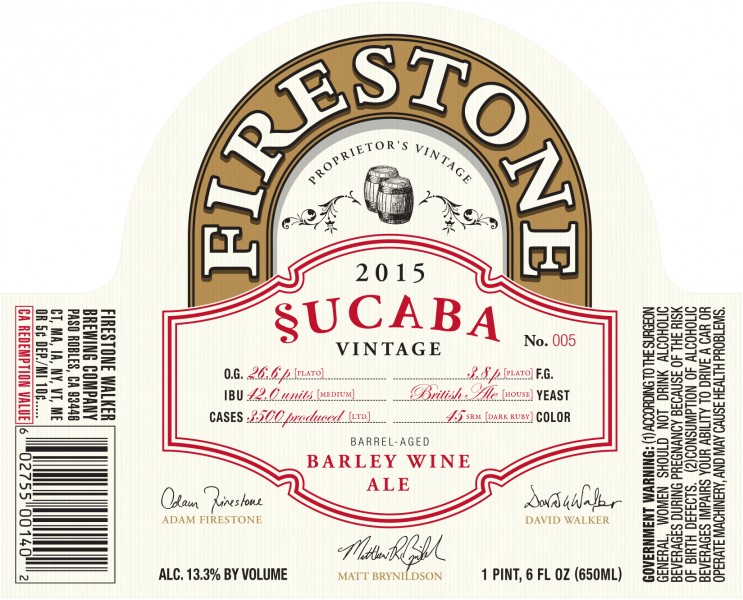 “We’ve never talked about it, but §ucaba is actually a blend of two separate beers,” Brynildson said. “The base beer is what you would call §ucaba, but each year the final blend also includes around 10 percent of another barrel-aged beer, which gives it this chocolaty, dark cherry dimension.”

Brynildson wouldn’t reveal the identity of the other component beer, but he did share some insights into the name §ucaba.

“Back in my early brewing days at Goose Island, I had this massive handheld calculator,” Brynildson said. “I would break it out when we were doing brewing calculations, and the guys would laugh at me and say, ‘Uh, oh, Brynildson’s firing up his abacus again.’ I always liked the word, and finally got to use it as a name for this beer.”

Alas, that original name was later undone by a legal challenge, and so the brewing team simply reversed it to §ucaba as a defiant yet virtually unpronounceable way to maintain the beer’s lineage.

So what’s the official pronunciation? “There is none,” Brynildson said. “SUC-a-buh, SOO-cah-ba, SOO-cab-uh, you hear it all, so it’s kind of fun. But in the brewhouse, we still call it by its original name.”

Aging: Barrel-aged for one year on average in retired Bourbon barrels

Cellaring
§ucaba is built to last and will reward careful cellaring (ideal aging temperature: 45F) for years to come. We recommend counting the years with an abacus.