(Ventura, CA) – Surf Brewery, a small commercial craft brewery, open since 2011, with an onsite tasting room and homebrew shop, announced that they are releasing the second in their Seasonal American Wheat series for 2015, called Wahine, and named after the term used for a surf chick. Certainly not a ‘chick’ beer, Strawberry Wahine Wheat Ale has a slight fruity flavor in a refreshing lighter beer at 5% ABV, 16 IBU and 4.5 SRM. 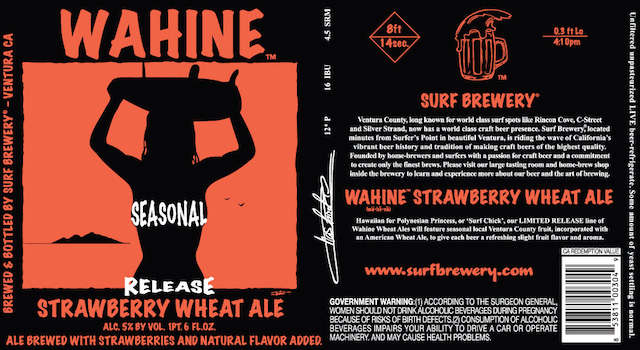 With Ventura County known for growing amazing fruit, Surf Brewery®, has incorporated a few local options, lemon, strawberry and in the fall grapefruit, into a light American Wheat Ale, making a refreshing an indigenous brew. This year, fresh whole strawberries from Oxnard Berry Farms were used along with natural flavors to provide the slightly bitter flavor of strawberry and amazing fruity aroma. Along with their seasonal lager, Springtime Bock, also recently released, the perfect beers to help pass the time as the winter swells give way to the spring calm. Pair with a strawberry tamale.

Available on draft and in the bottle for the next few months, just in time for the Annual Oxnard Strawberry Festival. Head dude and co-founder Bill Riegler says, “The Oxnard Strawberry Festival really gave us the first idea of doing a strawberry version of our American Wheat, when they asked us to brew for the festival a few years back. Now, it has a real following when it comes out, with people throughout Southern California searching for it at their local bottle shop or stopping into the brewery for a taste. In the late summer/fall we will add a new third version using local grapefruit peels to provide natural aroma and flavor. Gotta love the surf chick!”

About Surf Brewery®: Ventura County, long known for world class surf spots like Rincon Cove, C-Street and Silver Strand, now has a world class craft beer presence. Surf Brewery®, located minutes from Surfer’s Point in beautiful Ventura, is riding the wave of California’s vibrant beer history and tradition of making craft beers. Founded in June, 2011, by home brewers and surfers with a passion for beer and a commitment to create only the finest brews using the highest quality ingredients.