(Escondido, CA) – Each year, when July rolls through, Stone Brewing serves up a superhero of an imperial stout. Its sheer existence, a POW! BAM! WHAM! square to the face. Its contents – an art; its bottle – a collectible. Stone Brewing announces the release of Drew Curtis / Wil Wheaton / Greg Koch Stone Farking Wheaton w00tstout. 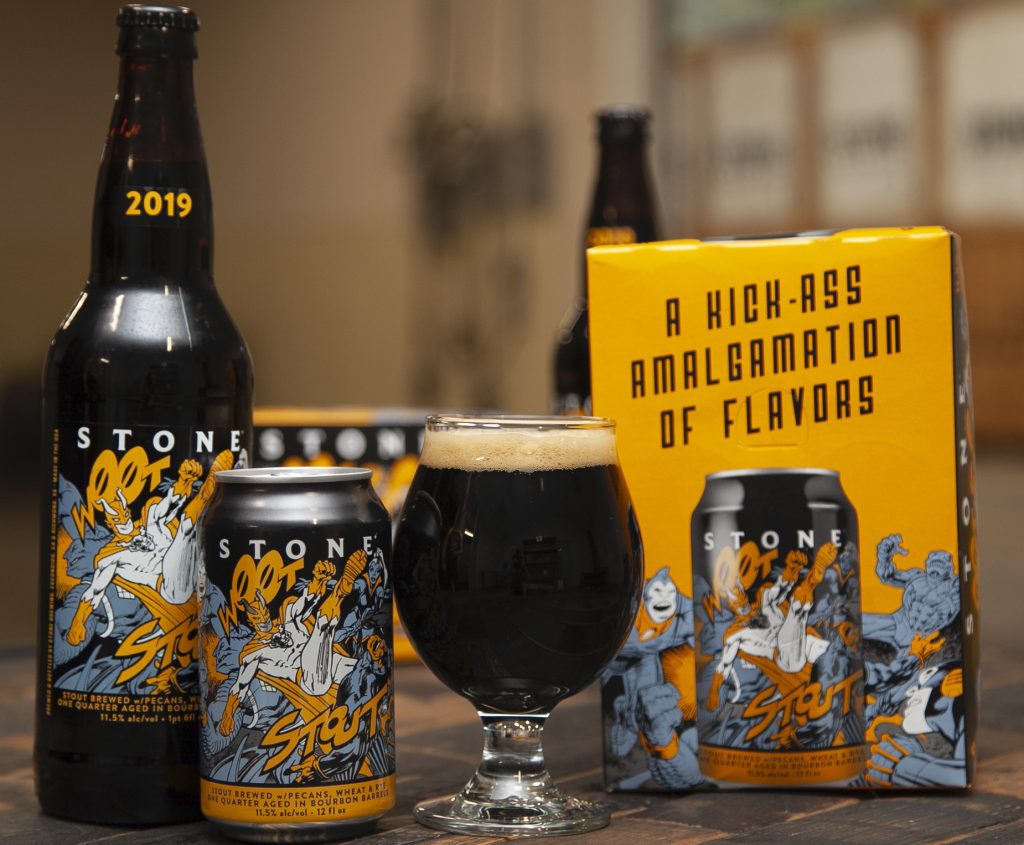 Over the years, Stone Farking Wheaton w00tstout has become one of Stone’s most anticipated annual releases, and not just because it’s an astoundingly flavorful beer concocted as a collaboration between FARK’s Drew Curtis, nerd royalty Wil Wheaton and Stone Brewing co-founder Greg Koch. It’s the incredible label art adorning this beer over the years that has elevated it to the pinnacle of beer, geekery and beer geekery. “W00tstout is more than a great beer,” said actor, writer and Stone Farking Wheaton w00tstout collaborator Wil Wheaton. “It’s a work of art, carefully designed to be as drinkable right now as it will be in a decade. I am so honored and proud to be one of its parents.”

This year’s artwork comes from the talented hands of comic artist Alan Davis, who has worked on some of the most iconic comic book series of all time, including Uncanny X-Men and Justice League of America. He depicts a hero who channels Stone’s iconic gargoyle’s guardian powers to battle against the evils of the world of beer (and as best we can tell, we’re quite sure he’s winning).

“I love love love this beer,” said Greg Koch, Stone Brewing executive chairman & co-founder. “I love the intensity and depth of its flavor profile, and I love how it came together between Drew, Wil, me and our brewing team. And fans have made it clear that they love this beer all the way to the depths of its awesomeness like we do. Yeah, I love that too.”

Stone Farking Wheaton w00tstout is brewed with pecans, wheat and flaked rye. It’s one-quarter aged in bourbon barrels and an assertive 11.5% ABV. Aromas of cocoa and coffee are followed by bourbon, vanilla and oak. Fruitiness adds to the cocoa and coffee up-front flavors, followed by a punch of oak, vanilla, nut and a hoppy, bitter finish. It’s smooth and creamy and ideal for cellaring as its complex flavors will evolve over time.

Traditionally in bottles and on draft only, Stone debuts Stone Farking Wheaton w00tstout in 12oz six-pack cans this year, making it all-the-more-accessible before, during and after spandex-clad battles and masked combat. The beer releases was the week of July 28.

About Stone Brewing
Founded by Greg Koch and Steve Wagner in 1996, the groundbreaking San Diego-based Stone Brewing is the 9th largest craft brewer in the United States. Recognized as an award-winning industry leader, Stone has been listed on the Inc. 500 | 5000 Fastest Growing Private Companies list 12 times and has been called the “All-time Top Brewery on Planet Earth” by BeerAdvocate magazine twice. The multifaceted company operates brewing facilities in Escondido, CA and Richmond, VA, in addition to tap room locations throughout the US, Germany and China. Known for its bold, flavorful and largely hop-centric beers, Stone has earned a reputation for brewing outstanding, unique beers while maintaining an unwavering commitment to sustainability, business ethics, philanthropy and the art of brewing… and pledging to never, ever, sell out to the man.  For more information on Stone Brewing, please visit stonebrewing.com or the company’s social media sites: Facebook, Instagram and Twitter.