(ESCONDIDO, CA)  – In 2013, Stone Brewing Co. CEO & Co-founder Greg Koch invited long-time friend, actor and overall geek idol Wil Wheaton, along with Fark.com creator Drew Curtis, to collaborate on a massive yet seductive imperial stout dubbed Drew Curtis/Wil Wheaton/Greg Koch Stone Farking Wheaton w00tstout. Since the beer was wildly popular with geeks and craft enthusiasts, Stone decided to re-brew it this year, inviting Wheaton and Curtis back to the brewhouse in May. However, with Koch out on sabbatical, Curtis called on longtime friend and multi-talented actress, comedian, podcaster and homebrewer Aisha Tyler to help brew the slightly revamped second iteration, renamed Stone w00tstout 2.0. Starting today, it is available in 22-ounce bottles and kegs at select retailers, restaurants and bars in Southern California, as well as Curtis’ home state of Kentucky. 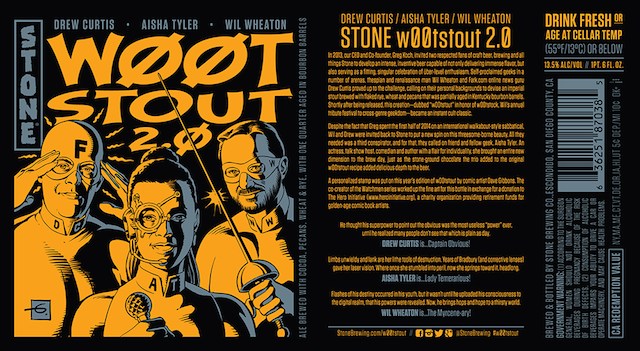 The original recipe for Drew Curtis/Wil Wheaton/Greg Koch Stone Farking Wheaton w00tstout drew on each collaborator’s personal background and included wheat (i.e.: Wil WHEATon), rye and pecans, with a portion of the beer stored in bourbon barrels for two months (honoring Curtis, the Kentucky Southerner) and then blended with the rest of the brew. This year, ChocoVivo Cacao was added to the recipe for a chocolate complexity, enhancing the already deep, roasty chocolaty and coffee notes. The result is a robust, full-bodied beer with pronounced notes of cocoa, coffee, black licorice, oak, nuts, vanilla and bourbon. Damn.

Due to its more than 13 percent alcohol-by-volume (ABV), fans may cellar the beer for several months or years to allow the deliciously rich flavors to mature, or enjoy it fresh. If stored at proper cellaring temperatures (~55° or lower), the hop aroma and bitterness will subside and Stone w00tstout 2.0 will develop more prevalent dark cocoa, coffee and nut flavors.

“I want to thank Wil and Greg for inviting me on this strange journey, and Aisha for joining us this time around,” said Curtis. “Wil has been a good friend for many years now, and it looks like Aisha will be as well (yeah, fans of bourbon!). Drinkers, beware: If you take down an entire bottle of Stone w00tstout 2.0 by yourself, it will be the last, best thing you remember. Trust the voice of experience here–the beer is meant to be enjoyed with friends. Also, stay off the Internet and don’t vote for anything while partaking.”

To give this year’s special edition bottle a pristine flair, famed comic artist and co-creator of the “Watchmen” series Dave Gibbons was commissioned to design the label. The new bottle features illustrations of Wheaton, Curtis and Tyler as superheroes–The Myrcene-ary, Captain Obvious and Lady Temerarious, respectively–equipped with special powers (theoretically), capes and masks. A heroic gargoyle emblem is also included on the bottle neck. At the request of Gibbons, Stone donated the label-design commission fees he would have received to The Hero Initiative, a charitable organization providing retirement funds for golden-age comic book artists.

As if Wheaton, Curtis, Tyler and Koch (who has since surfaced from his sabbatical) needed another excuse to exchange geeky lingo and beer talk, the collaborators will debut Stone w00tstout 2.0 en masse at Hop-Con 2.0: The w00tstout Launch Festival on Wednesday, July 23 at Stone Brewing World Bistro & Gardens – Liberty Station in San Diego. All four co-conspirators will be in attendance to meet, mingle and rub elbows with fans, all while celebrating the debut of Stone w00tstout 2.0. The event is sold out!