Stone Collaborates with The Alchemist and Ninkasi for Hurricane Irene Victims 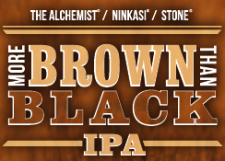 One of the many unfortunate casualties of Hurricane Irene was the destruction of The Alchemist Pub and Brewery in Waterbury, VT. When Stone Brewing Co. Brewmaster Mitch Steele heard of the loss, he immediately sent out an email to The Alchemist Head Brewer John Kimmich asking if there was anything he could do to help.

“John’s wife, Jen, wrote back suggesting that John fly out to Southern California for a few days… just to get a break from the reality of everything,” recounts Steele. “And almost as an afterthought, she casually mentioned that maybe we could even brew something together. I ran with it.”

Fresh off the tails of brewing the “Baird / Ishii / Stone Japanese Green Tea IPA” – another collaboration beer that raised $64,000 for victims of the earthquake and tsunami tragedy in Japan – Steele reached out to Jamie Floyd, Brewer/Co-founder of Ninkasi Brewing Company in Eugene, OR, who was happy to come onboard to complete the brewing trifecta.

“That’s what this entire industry is all about. No matter what the ‘competitive’ side is, we care about humanity, and we care about each other,” offers Floyd.

Proceeds from the beer will go directly to the Waterbury Good Neighbor Fund, a non-profit organization aiding families affected by the hurricane. “It’s a small town,” says Kimmich. “Even the influx of a few thousand dollars will have a huge affect. There are very low-income people who lost everything. And the idea of coming out to Stone and making a beer that will directly impact our town… it’s heartwarming to say the least.”