email
(Escondido, CA) – This week, Stone Brewing offers fair warning for when the company’s newest year-round beer washes ashore early next year. With a long and celebrated heritage of big, bold and flavorful porters, stouts, sours, IPAs, strong ales and more, Stone is proud to continue this tradition of pushing boundaries with the release of Stone Tropic of Thunder Lager. The new beer debuts in California and Stone Brewing Tap Rooms this week, with an international launch to come next year. 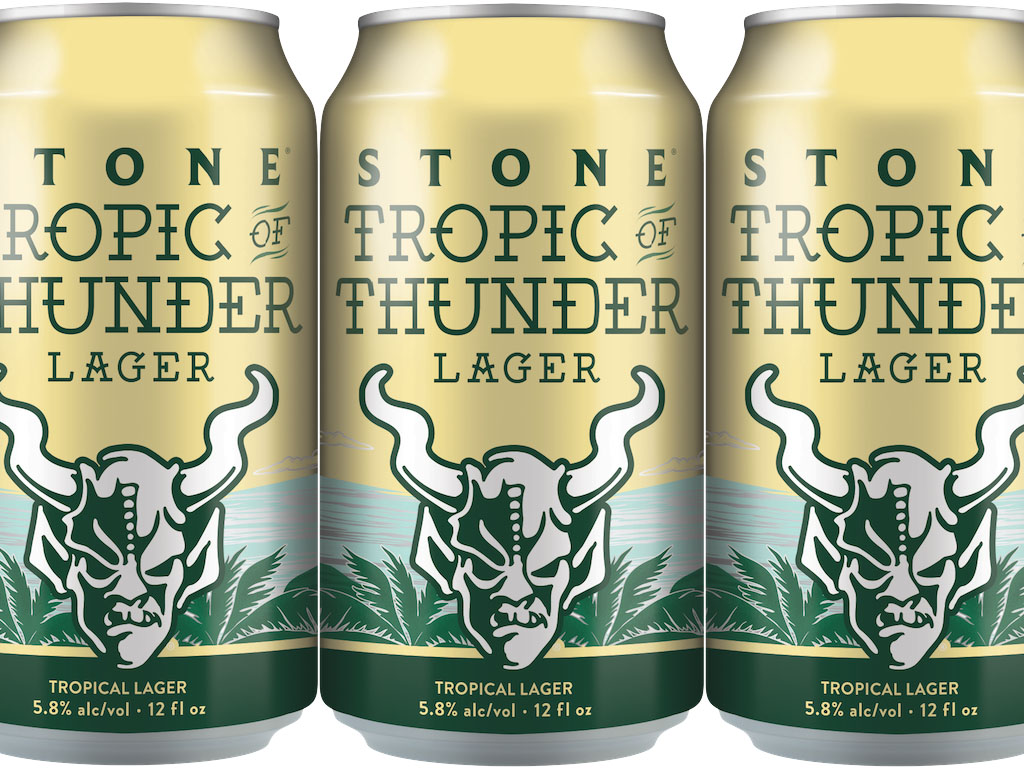 “This is unlike your traditional lager,” said Jeremy Moynier, Stone Brewing Senior Manager of Brewing & Innovation. “When we were discussing what our next year-round beer might be we all agreed that we wanted something super flavorful and yet really crushable, all while exemplifying the genre-defying qualities we’re known for at Stone. So while we did our signature thing – seeking out the newest and most interesting hops to contribute big flavor – we really stayed focused on producing a balanced beer with classic lager characteristics. It turned out crisp, clean, intensely fruity, and definitely way crushable.”

The beer’s name is a nod to the uncharted tropical islands on which most of us would willingly be a castaway… provided that we could have our perfectly stocked beer fridge in tow. It’s just right for a self-imposed “three hour tour,” be it on an island, on a boat, or simply on the couch. Aromas of citrus, pineapple and coconut are followed by flavors of lime, orange and passion fruit. A newer hop variety – Cashmere – when harvested at just the right time imparts flavors of ripe cantaloupe that elevate the juicy qualities of this beer. A welcome oasis, Stone Tropic of Thunder Lager proves to be the perfect island companion to a tropically-inspired, fruit forward lineup of IPAs, including Stone Tangerine Express IPA, Stone Scorpion Bowl IPA, and the upcoming Stone Revengeful Spirit IPA.

“We are really excited to bring Stone Tropic of Thunder Lager to market,” shared Dominic Engels, Stone Brewing CEO.  “More than 75 percent of US beer sales are lagers, and while craft is a growing segment, a big piece of that is still Big Beer. Alongside a handful of other standout craft brewers with lagers, we’re really reinventing this style; bringing a finely crafted, intensely flavorful lager to the market in all 50 states and more than 40 countries. We’re honored to put high quality back at the forefront of this genre, and especially proud to be doing it as a staunchly independent craft brewer.”

The new addition to Stone’s lineup is now available at Stone Brewing Tap Rooms and throughout California in 12oz six-pack cans and draft. The lager packs a 5.8% ABV and is brewed to be enjoyed fresh, which means the rescue boat has 120-days to get the castaways home or, more likely, re-stock the island’s refrigerator.

About Stone Brewing
Founded by Greg Koch and Steve Wagner in 1996, the groundbreaking San Diego-based Stone Brewing is the 8th largest craft brewer in the United States. Recognized as an award-winning industry leader, Stone has been listed on the Inc. 500 | 5000 Fastest Growing Private Companies list 12 times and has been called the “All-time Top Brewery on Planet Earth” by BeerAdvocate magazine twice. The multifaceted company was the first American craft brewer to build, own and operate its own brewery in Europe (Berlin, Germany), and also opened a production brewery in Richmond, Virginia in 2016. In 2018, Stone opened Stone Brewing – Napa in the heart of California’s wine country. Known for its bold, flavorful and largely hop-centric beers, Stone has earned a reputation for brewing outstanding, unique beers while maintaining an unwavering commitment to sustainability, business ethics, philanthropy and the art of brewing… and pledging to never, ever, sell out to the man.  For more information on Stone Brewing, please visit stonebrewing.com or the company’s social media sites: Facebook, Instagram and Twitter.