(ESCONDIDO, CA) – For 22 years Stone Brewing has celebrated its anniversary with a special release that’s big, bold and always memorable. This year, for the first time ever, the anniversary beer came about in an extraordinary way to mark the occasion. The double IPA is the winner of the Stone Spotlight Series, the annual competition that pits Stone’s brewers against one another in friendly rivalry. In a special tribute to its brewers, Stone is proud to announce the release of Stone 22nd Anniversary Anni-Matter Double IPA. 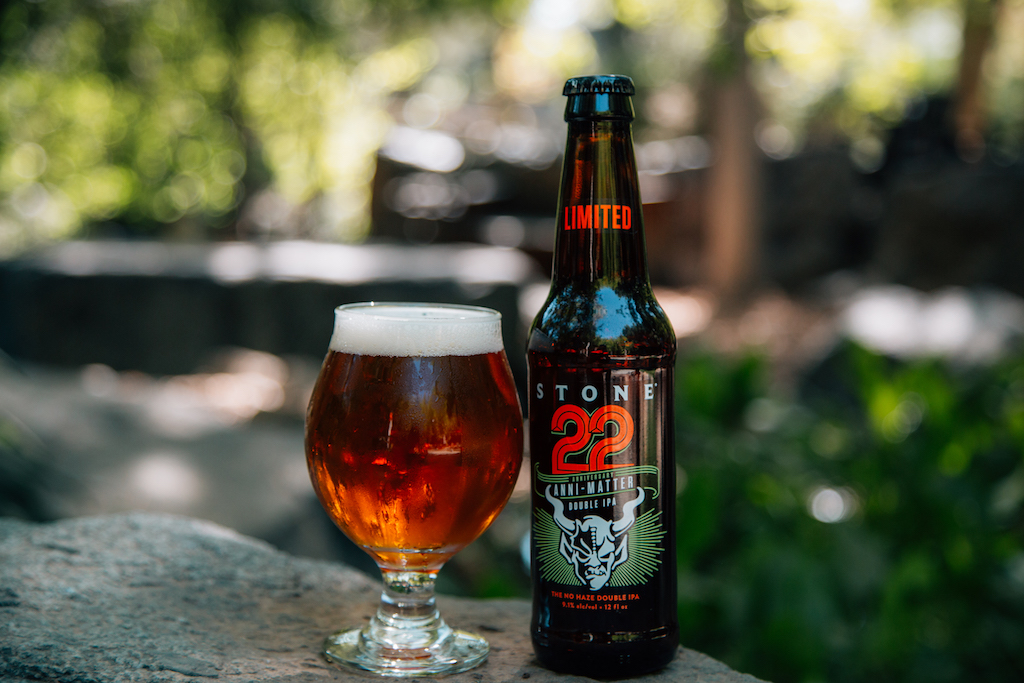 Not only is this IPA worthy of anniversary-beer-status, it serves as a reminder that Hazy Station isn’t the only stop on the way to Juicy Town. Stone Brewing Team members Jose Flores, a production brewer, and Jason Smith, who focuses on small batch brewing, joined up for Stone’s annual Spotlight Series competition and knocked it out of the park. To brewtheir award-winning beer, Jason and Jose gathered up their arsenal of anti-haze techniques, brewing with vibrant Denali hops against a base of Crisp Clear Choice Malt. The solid malt background of Stone 22nd Anniversary Anni-Matter Double IPA is complemented with complex hop fruit flavors of cherries, apricot, melon and citrus. It is full bodied with a short, clean and dry finish of ample bitterness and a slight warming from its elevated ABV. The juicy, yet bitter beer is clearly a Stone beer (pun intended).

Let’s let Jason and Jose take it from here:

Jose: We wanted to create the most clean and crisp IPA to go against the current perception that you have to have haze to create a great flavorful IPA. We also wanted to showcase new and experimental ingredients, all while focusing on an amazing quality IPA that’d exhibit fresh vibrant juicy characteristics.

Jason: In other words, we’re self-ascribed members of the ‘Anti-Haze Movement.’

Jose: We were on the same page that we really wanted this beer to be clean, crisp, and with a good mouthfeel.

Jason: We both worked in the Small Batch Department, which allowed us to work with a lot of the new experimental hop varieties that are being introduced. This gave us some insight about the beautiful hops that round out this beer.

Jose: The hops we used have been some of our new favorites, especially a hop as bright as Denali, which caught my attention when I first smelled it.

Jason: Besides beer, we also share a love for music and Underground Hip-Hop in particular (see our Spotify playlist for our collective favorites). The way producers piece together samples from different music sources from all over the world shares a lot of similarities with how we as brewers pull ingredients from different countries and cultures to make something completely unique, yet familiar.

Regarding the name, we were drawn to the word “antimatter,” which, in modern physics, is defined as a material composed of the antiparticle (or “partners”) to the corresponding particles of ordinary matter. Duality in all things!

Jose: ‘Anti-Matter’ is also one of the best songs on the album King Geedorah ‘Take Me to Your Leader’… Who is Mr. Fantastik?

Jason: And if you follow Jose’s underground reference there, then we applaud more than just your taste in beer!

Stone’s 22nd Anniversary is honored by this special release beer as well as the Stone 22nd Anniversary Celebration & Invitational Beer Festival in San Diego, taking place August 17 and 18, 2018. 100% of proceeds from the event go to charity, contributing to Stone’s more than $3.5 million in collective charitable contributions over its 22 years. Cheers to good craft beer, and the good that craft brews!

About Stone Brewing
Founded by Greg Koch and Steve Wagner in 1996, the groundbreaking San Diego-based Stone Brewing is the 8th largest craft brewer in the United States. Recognized as an award-winning industry leader, Stone has been listed on the Inc. 500 | 5000 Fastest Growing Private Companies list 12 times and has been called the “All-time Top Brewery on Planet Earth” by BeerAdvocate magazine twice. The multifaceted company was the first American craft brewer to build, own and operate its own brewery in Europe (Berlin, Germany), and also opened a production brewery in Richmond, Virginia in 2016. Known for its bold, flavorful and largely hop-centric beers, Stone has earned a reputation for brewing outstanding, unique beers while maintaining an unwavering commitment to sustainability, business ethics, philanthropy and the art of brewing… and pledging never, ever, to sell out to the man.  For more information on Stone Brewing, please visit stonebrewing.com or the company’s social media sites: Facebook, Instagram and Twitter.