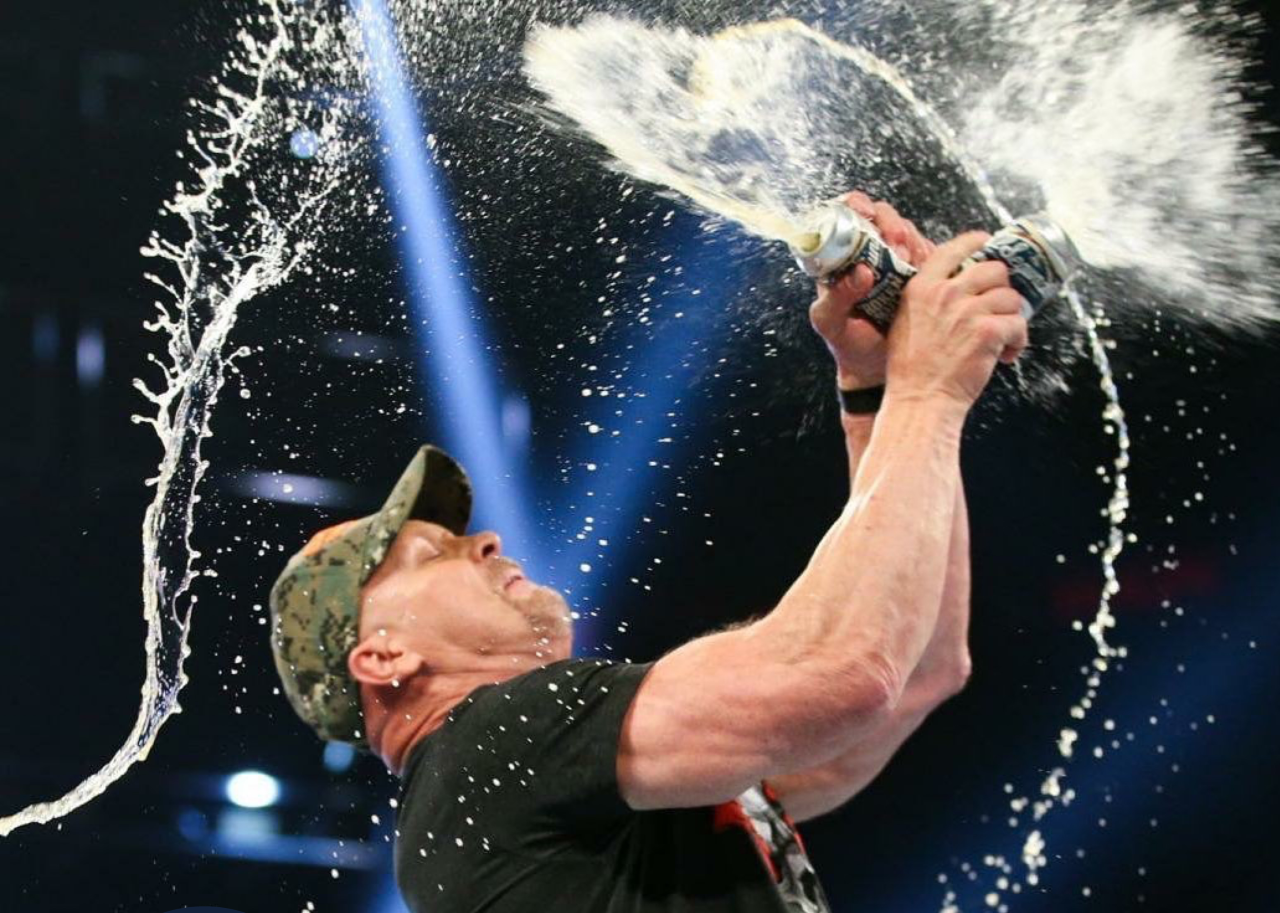 Better known for his lager loving years in the ring, Steve Austin has but one true beer love…hoppy West Coast IPAs. Steve has been brewing “Broken Skull IPA” in collaboration with El Segundo Brewing Company for 5 years but it has only been available in California…until now.

Steve fell in love with hops and developed a taste for ESBC while filming in L.A. In 2015, he reached out to us about brewing a beer…the answer? “HELL YEAH!” After an afternoon of drinking IPAs and chatting about the characteristics Steve wanted in his beer, Broken Skull IPA was born. “He has a really good palate and a clear idea of what he was looking for- low to medium body, low bitterness, apparent hop flavor, and Citra hop aroma” says ESBC founder Rob Croxall.

With batch #1 in the tanks, the release party was announced, and tickets sold out in 4 hours. Steve Austin fans flew in from around the country for this release and people the world over wanted cans…but we only put it in bottles! “Back then, cans weren’t what they are today,
and we didn’t have the capabilities anyhow,” says Tom Kelley, ESBC’s “Mr. Everything”. “We knew we couldn’t meet the demand, so we didn’t even try.” If you wanted Broken Skull, you had to come to Southern CA, where it remained in 22oz bottles. As demand for cans grew, ESBC made plans for a switch. Then, in July 2019, Steve got in the ring on Monday Night Raw and can smashed Broken Skull on national TV.

Prior to the appearance, Steve called ESBC up and shared that he had been asked to return for a show but that he’d only do it if he got to bring Broken Skull IPA for his classic victory can smash. His terms were met and ESBC delivered 36 hand-labeled cans ringside on
very short notice. When showtime came, it wasn’t just him drinking Broken Skull IPA, WWE had plastered the bottom third of the telecast with ESBC and Broken Skull logos. Croxall says, “Steve got us 10 minutes of product time on National TV”. Overnight, demand for Broken Skull grew 100 times over. ESBC put everything on hold and focused on putting Broken Skull in cans, as quickly as possible. In order to gauge how much of this beer fans wanted, ESBC setup an exploratory presale headed for New York and Boston. That presale quickly went from “maybe a pallet or two” to “we’re gonna need a bigger truck.” Message Received.

El Segundo Brewing Company is an independently owned craft brewery that started production in May 2011. They focus on high quality, hop forward brews and building a company culture around providing a great working environment and supporting the local community.
Brewing 6,700 bbls in 2019, ESBC is the second largest independent brewery in Los Angeles County. ESBC also operates a satellite taproom/pizzeria called “The Slice & Pint”. This offshoot features ESBC beer alongside a selection of guest taps and features a menu that’s heavy on hand-tossed and pan pizzas as well as a wide selection of appetizers and salads. The well thought out menu is curated by their in-house classically trained chef.