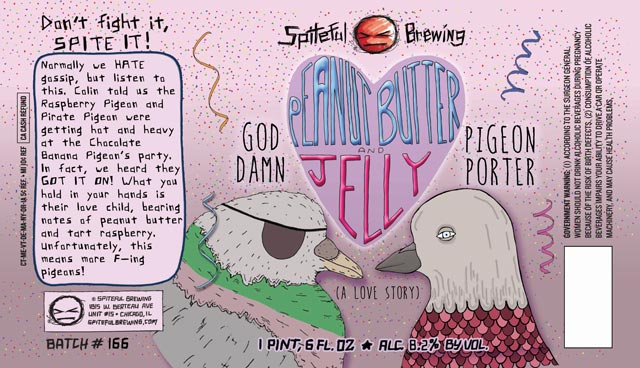 God Damn Peanut Butter and Jelly Pigeon Porter adds to the ranks of variations on the beer God Damn Pigeon Porter.  Ingredients added to previously released porters in the series include cascara, raspberry, and peanut butter; a recent “chocolate banana” variant was brewed with cocoa powder and fermented with hefeweizen yeast,  “The Pigeon Porter series has been a hit for us,” Spiteful Representative Calvin Fredrickson says. “We love the base beer, God Damn Pigeon Porter. Brewing different versions of it, pulling back on the hops and adding ingredients — it’s been an outlet for us to have fun with an already great beer.”

Deliveries for God Damn Pigeon Porter and its PB&J-inspired variant will be completed this week. Currently, Spiteful’s canned offerings are only available in Chicago proper, while bottled releases see distribution to both city and suburban locations.  The brewery notes that their PB&J porter is not to be understood as a form of liquid lunch. “This is not a meal replacement. It’s a beer that was inspired by a sandwich,” Fredrickson says. “Baseball bat sold separately.