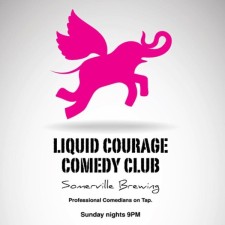 (Somerville, MA) – Somerville Brewing Company, the makers of Slumbrew beers, is excited to announce a new Comedy Club experience at their brewery in the Boynton Yards area of Somerville, MA. The comedy club experience is called the Liquid Courage Comedy Club at Somerville Brewing Company. The brewery and destination-taproom, which opened in April of 2105, opens Sunday nights as a showcase style stand-up comedy club open to the public 21+ with no cover charge or ticket fee. Guests are able to order charcuterie boards, dinner and pints during, before and after the show. With a Sunday night show time of 9PM there is ample free parking is available.

The opening night on September 6th filled to capacity and guests were entertained by 7 professional comedians and show host C.J. Browne. “We’re excited to offer a curated show of experienced local comedians. Since the room and setup require excellence the showcase is not an open mic night. We are absolutely psyched about the success of opening night. We played to a full house that loved the show.” Show performer Gary Peterson says “The Slumbrew comedy show was such a fun room to work, because the owners care about making it fun. A packed house of young heroes supporting the local scene makes this place special. It makes me happy to know something so cool is alive in Somerville.”

“We have this wonderful space and it works so well for stand-up comedy. Our team mission is to make good liquids and make good friends. Comedy shows are such a great way to enjoy time with friends over a pint. It was so incredibly rewarding to see the whole brewery packed with people, pint in hand having a fantastic time.” -Caitlin Jewell Co-Owner of Somerville Brewing Company.

Somerville Brewing Company, Inc. the makers of Slumbrew craft ales was started in Somerville Massachusetts by Jeff Leiter and Caitlin Jewell in 2011. Slumbrew’s core beers include Flagraiser IPA, Happy Sol, Porter Square Porter and Trekker Trippel. Slumbrew is available in 12 and 22 ounce bottles, growlers and on tap in six states.