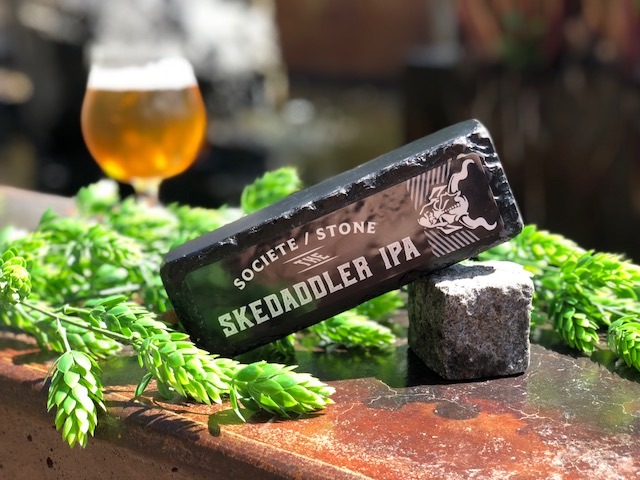 “We consider Stone trailblazers of the craft-beer revolution. Their vision was so in line with ours that, in the early days of Societe, we reached out to them and they were kind enough to provide some useful advice that helped shape our company,” says Societe co-founder Doug Constantiner. “It was such an honor for Stone to ask us to brew a collaboration beer with them.”

The belief of the team at Societe Brewing is that draft is the ultimate experience when it comes to hop-driven beers. So when Stone Senior Innovation Brewing Manager Jeremy Moynier contacted Constantiner and Societe co-founder Travis Smith to see what they’d think of brewing a collaboration beer that would be shipped across the country exclusively in kegs, the duo, touched by that level of respect and accommodation, happily jumped onboard. Stone and Societe started down the long, temperature-controlled road to what is Societe / Stone The Skedaddler IPA. Coming in at 7% alcohol-by-volume and boasting an eclectic hop bill built with American, Australian, German and New Zealand hops, it is full-bodied yet dry on the finish, with vibrant citrus, stone fruit and tropical flavors on the palate; just what a craft-beer fan would expect from two companies renowned for their IPA prowess.

“Independence is always in our battle cry, each year we release a draft-only beer in the summer months that reinforces our steadfast commitment,” said Stone CEO Dominic Engels. “Societe is the perfect partner for this occasion. The team maintains incredible allegiance to its fans and its dedication to delivering only the freshest beers. Like us, they’ll never sacrifice quality. Independence is our mutual guarantee to fans that these moral beliefs will never be compromised.”

“The fact that Stone would go so far to help us share our ideals and our beer with craft-beer lovers across the US means so much to us,” says Constantiner. “We only distribute in San Diego County, so for many this will be their first taste of anything having to do with our brewery. Knowing how much Stone cares about that is a big deal. They say it can be dangerous to meet your heroes, but this beer and the process that birthed it proves it can also be awesome.”

Societe / Stone The Skedaddler IPA will be available nationwide beginning this week. And did we mention it will be draft-only?

About Stone Brewing
Founded by Greg Koch and Steve Wagner in 1996, the groundbreaking San Diego-based Stone Brewing is the 8th largest craft brewer in the United States. Recognized as an award-winning industry leader, Stone has been listed on the Inc. 500 | 5000 Fastest Growing Private Companies list 12 times and has been called the “All-time Top Brewery on Planet Earth” by BeerAdvocate magazine twice. The multifaceted company was the first American craft brewer to build, own and operate its own brewery in Europe (Berlin, Germany), and also opened a production brewery in Richmond, Virginia in 2016. Known for its bold, flavorful and largely hop-centric beers, Stone has earned a reputation for brewing outstanding, unique beers while maintaining an unwavering commitment to sustainability, business ethics, philanthropy and the art of brewing… and pledging never, ever, sell out to the man.  For more information on Stone Brewing, please visit stonebrewing.com or the company’s social media sites: Facebook, Instagram and Twitter.

About Societe Brewing
An independently-owned-and-operated production brewery founded by a pair of professional brewers in 2012, Societe Brewing produces an array of almost-exclusively draft offerings ranging from hoppy “Out West” ales, to Belgian-inspired and continental “Old World” ales and lagers, and dark “Stygian” beers. The brewery also features a 1,500-square-foot, temperature-controlled room housing used wine barrels filled with a maturing stock of “Feral” (barrel-aged sour) ales. Proud to be part of the hotbed of brewing innovation that is San Diego, California, Societe distributes its beers to finer bars and beer-centric restaurants and retailers throughout its home county. The brewery has earned medals in multiple style categories at the Great American Beer Festival, World Beer Cup and San Diego International Beer Festival competitions, and its multifarious portfolio of beers includes The Pupil and The Apprentice IPAs, The Coachman Really Small IPA, The Harlot Belgian-style Blonde Ale, The Heiress Czech-style Pilsner, and The Butcher Imperial Stout. For more information, visit the company’s official website—societebrewing.com—or follow Societe via social media on Facebook, Twitter, and Instagram.