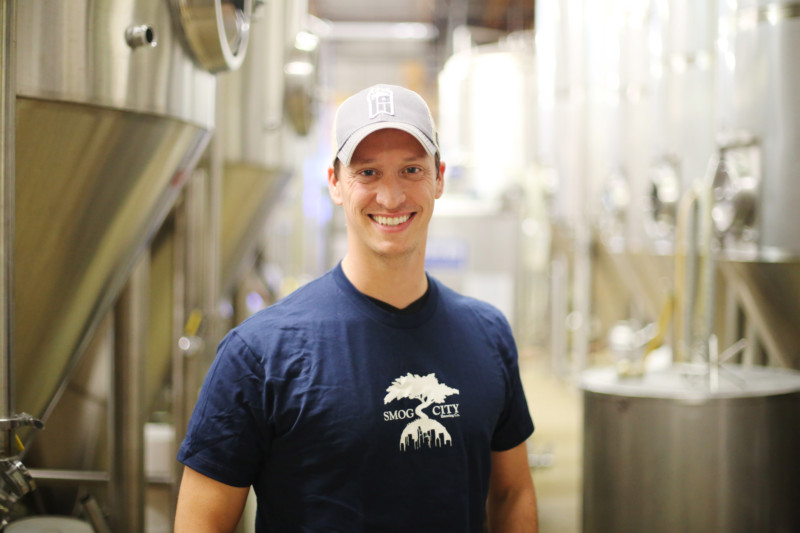 Harbage – a former chemical engineer turned brewer – dove head-first into his passion for craft beer as a homebrewer before convincing Rock Bottom Brewery (San Diego)’s then brewmaster Jason Stockberger (now of Hess Brewing) to show him the ropes of professional brewing. From there, Harbage moved to Los Angeles to become the first shift-brewer at the newly opened Golden Road Brewing where he would move up to Head Brewer at the brewery’s original production facility. Harbage comes to Smog City with a wealth of knowledge and will focus on increasing production, improving process efficiency, while ensuring they maintain Smog City’s tradition of creating exceptional beers of impeccable quality.

“As Smog City continues to grow, we have found it increasingly important to put into place systems and organizational elements that allow us to build brand while maintaining our focus and commitment to quality over quantity,” co-founder Laurie Porter says. “Tim brings to the table a true dedication to not only the quality of the beer but the cohesiveness of the team.”

Laurie and her husband Jonathan Porter launched Smog City five years ago from a small brewpub in Tustin, CA before opening their own 5,500 sq. ft. production brewery and tasting room in Torrance in 2013. In the last nine months, they have taken over neighboring spaces to gradually expand their footprint to 22,000 sq. ft. The new space will be dedicated to expanding their cellar space, making room for equipment, and growing their popular barrel-program. 2,700 sq. ft. will be dedicated to their barrel-aged Sour Program.

“Bringing on Tim allows [Jonathan] Porter to continue to grow the creative side of Smog City and push through to new styles while developing procedures to achieve the high-quality beers Smog City is known for,” Laurie says.

Coming off big wins at World Beer Cup and the Great American Beer Festival earlier this year, Smog City has also been part of some unique collaborative efforts such as a wine juice and barrel-aged sour beer hybrid called Brix Layer with J. Brix Winery, a rare honey beer, Buzz Worthy, with Moonlight Meadery, and participating in the Southwest group for Sierra Nevada’s Beer Camp Across America collaboration.

“Tim’s passion and enthusiasm for beer and the craft beer community are unmatched, which when combined with his engineering background and strong experience in growing young breweries will be instrumental in helping Smog City expand our business as we move forward,” Jonathan says. “Smog City is very proud to be a family-owned craft brewery and Tim is a perfect fit with our team.”