(Torrance,CA) – 2014 has definitely turned out to be The Year of the Squirrel at Smog City Brewing. Three years ago we developed and nurtured our sweet little Sabre-Toothed Squirrel into a world class hoppy amber. This beautiful beer has now filled the hearts and tastebuds for many hop-loving, malt forward craft beer drinkers across the Los Angeles area and is finally extending his reach! 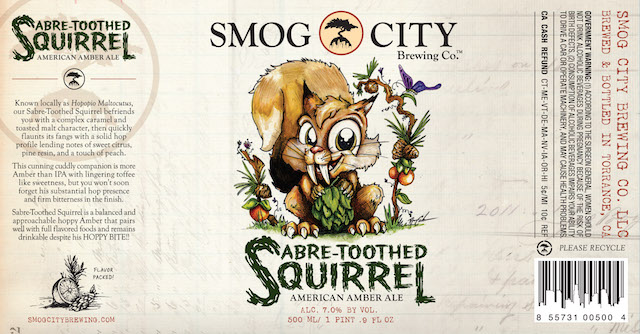 We are releasing the first bottles of Sabre-Toothed Squirrel on Wednesday, Nov 12th at the taproom. This hoppy amber will also go out for distribution at the same time and hopefully you’ll be lucky enough to see him popping his head up in various independent and chain beer stores around L.A. and San Diego(extremely limited in SD.)

Sabre-Toothed Squirrel was first brewed at Tustin Brewing Co and quickly became a favorite within our brewery’s ranks. The sweet malt body balances out the bracing hop bitterness making for a full mouth feel and extremely versatile food pairing beer. The rich toasty body finds a wonderful partnership with many foods including BBQ, Steak, pizza and more.

The origin of the name comes from 2011. Porter was reading Wired Magazine and read about the discovery of the first saber-toothed squirrel fossil. At the time he was in the development stage for a hoppy amber and the minute he read the article, he knew he’d found the perfect name. He walked into the house, said I’ve named my amber and as the name rolled off his tongue, there was no question…Sabre-Toothed Squirrel was born. Few of our beer names come with as little struggle or brainstorming as this beer but it has proven to be tried and true winner in the craft beer world.

The hops in Sabre-Toothed Squirrel are Chinook, Falconers Flight, and Centennial.