Hoperation Ivy was brewed within hours of the hop harvest in August and will hit shelves September 16th as #24 in Ska’s Local Series. This year’s “all-Colorado” batch used fresh Colorado Cascade hops from High Wire Hop Farms in Paonia and grain from Colorado Malting Company in Alamosa.

“Using locally-grown hops that we just picked a few hours ago is going to make an incredible beer,” says Bill Graham, Ska Co-founder and Brewing Overlord. “It’s a very unique, seasonal beer that can only be brewed once a year, and it’s also low impact.”

The timing of the harvest and conditions of the growing season contribute a unique character to each year’s batch. Generally, when hops are harvested they are dried and pressed into pellets, but fresh hop, or “wet-hop” beers use whole flowers that were plucked from the bine just hours before and still retain most of the volatile flavor compounds that are lost during processing. 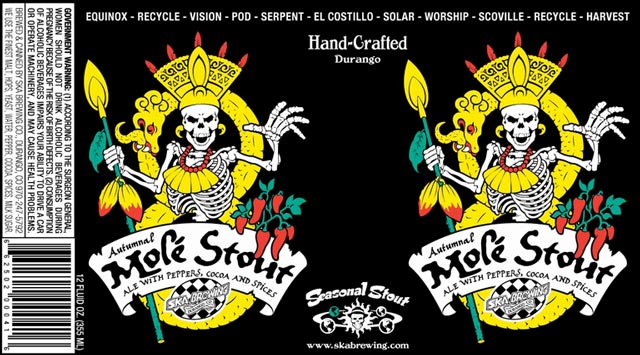 If this rare and delicious beer isn’t enough, September 23rd begins the third year of Ska’s Seasonal Stout program––featuring a different canned stout released near the equinox or solstice of each of the four seasons––kicking off with Autumnal Molé Stout.

About Ska Brewing
Based in Durango, Colorado, Ska Brewing was founded in 1995 and produces over a dozen award-winning beers. Many of Ska’s brews are widely available in cans including ESB Special Ale, True Blonde Ale, Modus Hoperandi IPA, and rotating seasonals. For more information, current offerings, music and a good time, visit http://www.skabrewing.com. Check out the brewery’s profiles at http://facebook.com/skabrew and http://twitter.com/skabrewing for beer releases and up to the minute happenings.