It is true, you’ll be hard pressed to find many Short’s collabs with other breweries. It’s not that we don’t play well with others, we just keep pretty busy with our own ideas. But once in awhile a connection is made and an opportunity is presented that just feels right. Who are we to stand in the way of fate? Some beers just need to be made, and such was the case with Tip ta Tip. 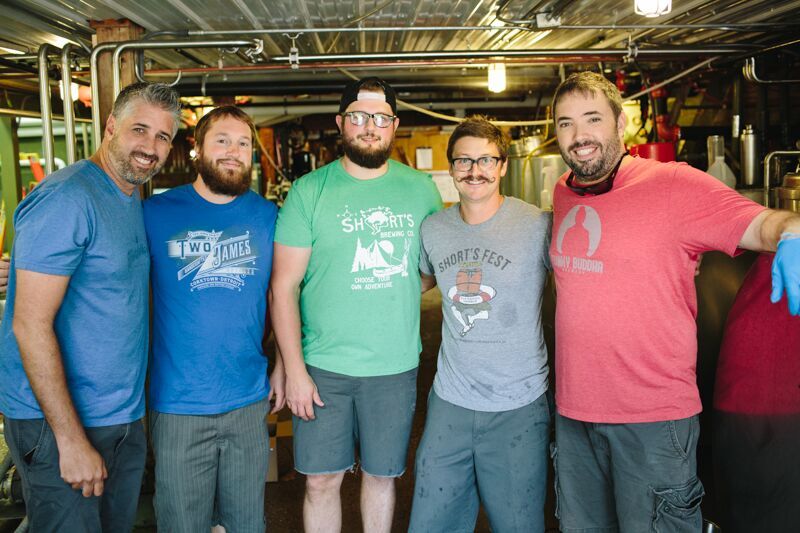 Our friendship with Funky Buddha grew over the course of many a beer fest, with many a different employee. A pattern emerged, with each employee returning from each beer fest, mentioning to those back at the homeland what cool dudes and tasty brews Funky Buddha had. One thing led to another, and we decided to take our relationship to the next level.

Fast forward to August of this year. Ryan and Casey of Funky Buddha Brewery join us in Bellaire to help us brew the Michigan portion of our joint beer. Not sure we needed their help, but they were pretty to look at so we let them stay. Later this week, we’ll be migrating south (just in time for snowfall, aka well-planned), to give them a hand with the Florida portion of Tip ta Tip.

So what is the beer you ask? That’s where it gets really exciting. Tip ta Tip (think peninsulas folks, come on!), is an Old Fashioned inspired beer. Taking advantage of the native fruits of our respective states, the final brew is actually two beers blended together. Funky Buddha’s being a Florida orange, yarrow, and rosemary Gruit, and ours a Strong American Ale brewed with Michigan cherries. Both aged in bourbon barrels and combined to become one for the first time at Extreme Beer Festival in Boston this coming February.

Not making the trip to Boston for EBF? We’ve got you covered. Keep your eyes peeled for a very special edition of our Private Stache series to be released early next year.

To learn more about this collaboration, be sure to check out this week’s episode of Short’s Cast, coming soon. And if you happen to be in the sunshine state this Friday, be sure to stop by Funky Buddha’s All Up in Our Short’s tap event and say hi to Joe, Tony, and Scott!