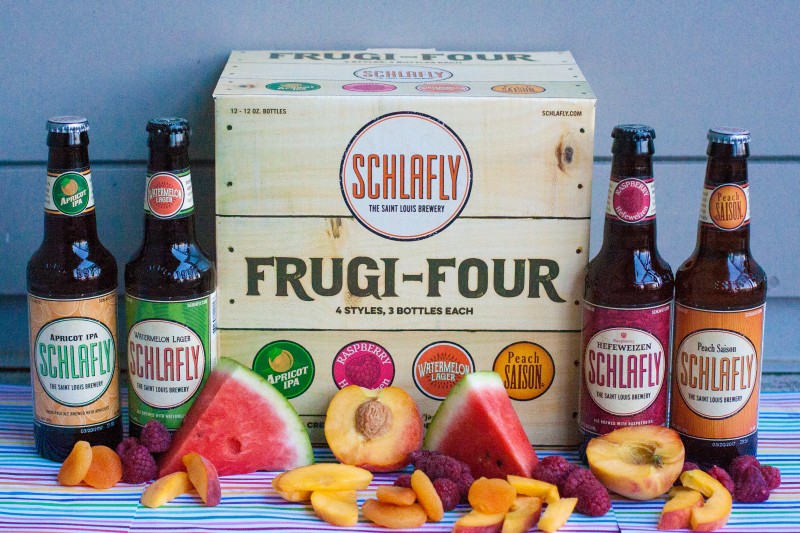 The new pack showcases two important points of pride for the largest, locally owned brewery in Missouri: a dedication to interesting sampler pack offerings as well as a showcase of its commitment to brewing with only real fruit instead of artificial flavors.

Ambassador Brewer Stephen Hale explains, “A frugivore is someone or something who primarily eats, or in this case drinks, fruit. We wanted to celebrate our commitment to brewing true fruit beers. This has always been an important distinction for us at Schlafly Beer. We use real fruit throughout different stages of the brewing process, which highlights the natural flavors and aromas of the carefully selected fruits to complement the paired beer styles.”

From the late-summer Hop Trial pack, which showcases Schlafly’s relationship with hop farmers, to the winter Stout Bout, which offers unique stout varieties in advance of the brewery’s largest food and drink festival, Stout & Oyster Festival in March, the sampler packs have become a great consumer education tool to showcase what’s important to Schlafly Beer.

Hale elaborates further, “The sampler packs encourage conversations amongst our consumers. It’s more than just about offering variety. Many gather with friends to trial the beers together at once and host their own mini tastings, and they utilize the packaging copy to learn a bit about the brewing process.”

Apricot IPA
Brewed with fresh apricot
ABV: 5% IBU: 40
Rather than add sugar or artificial flavor to their IPA, Schlafly brewers ferment it with pounds of apricot then dry hop it with Simcoe and Cascade hops for several days. The American hops and yeast combined with the fruit’s subtle sweetness create layers of tart aromas and a crisp hoppiness that make this style as approachable as any.

Watermelon Lager
Fermented with real watermelon
ABV: 4.5% IBU: 17
In 2016, Schlafly began trialing more beers that incorporate ingredients both during fermentation and after. For this refreshing version, they brew their popular Helles-style lager then add watermelon to the fermenter. It emerges smooth, bright and malty with a twist of flavoring sweetness from the fruit.

Raspberry Hefeweizen
Brewed with real raspberry
ABV: 4.1% IBU: 16
Schlafly’s Raspberry Hefeweizen distinguishes itself among others in that it’s a true fruit beer—not a fruit-flavored beer—that uses real raspberry in the brewing process. Once the fruit’s sugar ferments out, the aroma and flavor of raspberries remain, making this a delightfully drinkable beer that’s not too sweet or tart, but refreshing and balanced with a naturally hazy pink coloring. Because it’s low in alcohol and brings a smooth dose of wheatiness, it’s perfect for summer.

Peach Saison
Fermented with fresh peaches
ABV: 6% IBU: 15
This cloudy wheat beer is made in the tradition of Northern France’s farmhouse ales, but with the addition of peach added during fermentation. The malts lend a soft sweetness while the hops bring out a hint of spice, the French yeast strain adds complexity and the peach contributes balance and subtle fruit flavors. Much like our other beers of this same style, its strength is in its simplicity, and finishes crisp and dry.

The Frugi-Four pack can be purchased at the Schlafly brewpubs or across the brewery’s distribution region ($13.99 suggested retail). For more on Schlafly Beer’s distribution, visit www.schlafly.com/beers/distribution.

About Schlafly Beer: Founded in 1991 in St. Louis, Schlafly Beer is the largest locally owned and independent craft brewery in Missouri, proudly offering more than 60 unique styles of craft beer. The celebrated brewing company continues to define craft with a dedication to sourcing the best ingredients, supporting local sustainability and community efforts whenever possible, and delivering a superior beer experience from year-round to limited-edition styles. In 2016, the brewery used 102 hop varietals, 77 malts and grains, 59 different spices and fruits, and 10 different yeast strains to make its beers. Schlafly Beer’s production of 60,000 barrels of beer took place between its two brewery-restaurants, Schlafly Tap Room (2100 Locust St.) in downtown St. Louis, and Schlafly Bottleworks (7260 Southwest Ave.), located in Maplewood. The Schlafly Tap Room was the first new brewpub to open in St. Louis since Prohibition and is housed in a restored wood and brick building, listed in the National Register of Historic Places. Schlafly Bottleworks offers free weekend tours every Friday, Saturday, and Sunday from 12-5 p.m. on the hour, and every half hour on Saturdays. Schlafly Tap Room offers free brewery tours every Sunday.