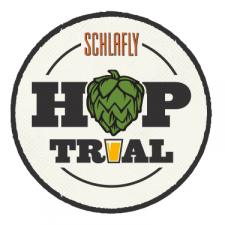 (St. Louis, MO) – Schlafly Beer, the largest, locally owned brewery in St. Louis, announces today the launch of a new educational website for hop-head beer drinkers with HopTrials.com. Every six weeks, the brewery releases a new rotating SMaSH beer, a single hop, single malt beer where the hop is the only changing variable, in their brewpubs. Consumers are encouraged to share their feedback of the beer on the brewpub’s Hop Trial board or now online with the new site. In addition to tasting notes, intrigued Hop Trial beer drinkers can learn even more about the hop’s origin, the brewery’s relationship with the farm, and more.

CEO James Pendegraft explains, “In our 25-year history, we’ve established some deep relationships with hop farmers around the world. We work directly with the farmers who grow our ingredients, and we’re often asked by hop growers to provide feedback about how a hop performs in the brewing process. Our Hop Trial program allows consumers to have a say in the hop as well.”

For the Hop Trial SMaSH beers, Schlafly brewers use the same amount of hops in each brew (32 pounds), add the hops at the same brewing time and use the same malt. This allows the brewing team to isolate the changes in the beer from the hop. For example, this month’s trial is of X331, a hop from the Willamette Valley in Oregon. The Schlafly team discovered the hop on their yearly trip to the Pacific Northwest to visit the Indie Hops group. The X331 hop is grown on the Goschie farm where the focus is on growing hops the most organic way possible. Head of Brewing Operations, Emily Parker, felt the hop would be great to trial due to its strong tropical fruit and citrus characteristics. “The hops smelled like juicy fruit. I knew that we had to trial it just based on its aroma.”

Once the beer is brewed, consumers are invited to think like a brewer and share their tasting notes on aroma and taste based on four hop characteristics: resin, floral, fruit and spice. Now, they can submit their thoughts on HopTrials.com and the feedback will be shared, along with the brewers’ notes, directly to the farmers.

In addition to the rotating brewpub draft offerings, Schlafly also releases a Hop Trial sampler pack every summer that allows consumers to compare SMaSH beers from four very different hops. Pendegraft elaborates, “We found that last year, consumers were conducting their own mini-tastings at home–discerning the different flavors and aromas from each of the Hop Trial beers. It adds a fun, educational component to the standard sampler pack experience.”

About Schlafly Beer: Founded in 1991 in St. Louis, Schlafly Beer is the largest locally owned and independent craft brewery in Missouri, proudly offering more than 60 unique styles of craft beer. The celebrated brewing company continues to define craft with a dedication to sourcing the best ingredients, supporting local sustainability and community efforts whenever possible, and delivering a superior beer experience from year-round to limited-edition styles. In 2016, the brewery used 102 hop varietals, 77 malts and grains, 59 different spices and fruits, and 10 different yeast strains to make its beers. Schlafly Beer’s production of 60,000 barrels of beer took place between its two brewery-restaurants, Schlafly Tap Room (2100 Locust St.) in downtown St. Louis, and Schlafly Bottleworks (7260 Southwest Ave.), located in Maplewood. The Schlafly Tap Room was the first new brewpub to open in St. Louis since Prohibition and is housed in a restored wood and brick building on the National Historic Register. Schlafly Bottleworks offers free weekend tours every Friday, Saturday, and Sunday from 12-5 p.m. on the hour, and every half hour on Saturdays. Schlafly Tap Room offers free brewery tours every Sunday.