(St. Louis, MO) – Schlafly Beer, the largest locally owned brewery in St. Louis, announces the release of its popular, seasonal Oktoberfest beer in 12-packs of 16-ounce cans. This is Schlafly’s second seasonal can release for 2018, following the year-round release of White Lager and spring seasonal release of Hoppy Wheat cans. The 12-packs are now available across Schlafly’s distribution footprint. 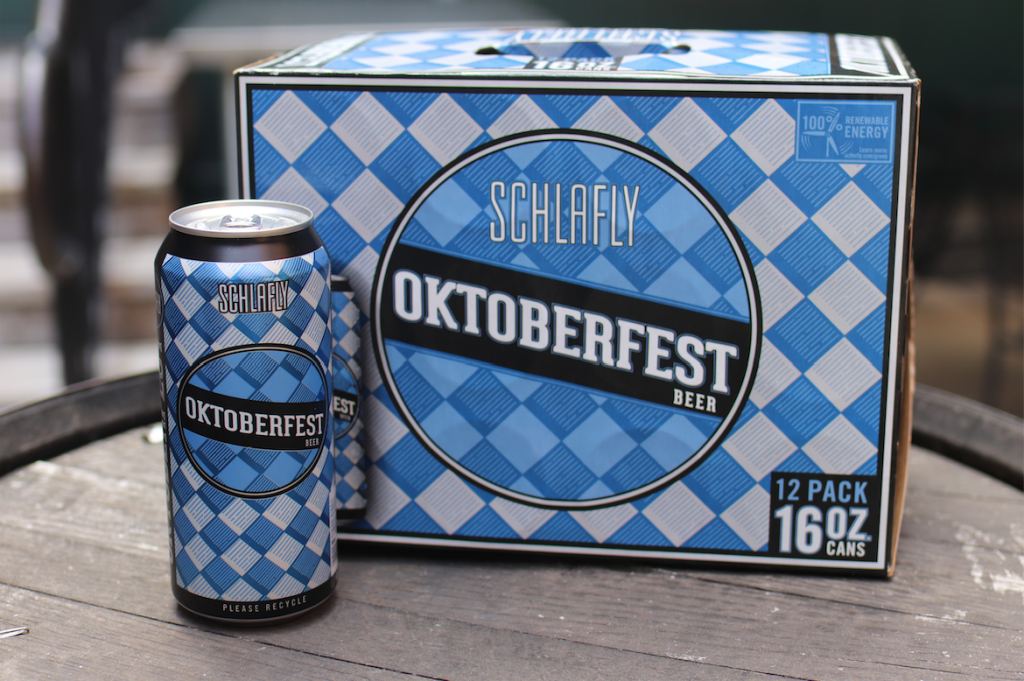 The celebratory autumnal style, named one of USA Today’s Oktoberfest beers to try, is a traditional Märzen. At 5.5 % and 25 IBUs, the amber-colored beer is balanced in its sweetness and toasted malts from months of fermentation, making for a smooth and clean brew.

Schlafly’s classic crowd-pleaser is perfect for any Oktoberfest celebrations here in the States. “Our Oktoberfest is authentic in its execution and evocation of heritage. We use Munich malt and German hops for this traditional Märzen. It’s a tasteful tribute to our German roots,” says Founding Brewer Stephen Hale.

Schlafly Beer has been steadily adding to its can lineup, from the year-round release of 12-packs of 16-ounce White Lager cans and 16-ounce Hoppy Wheat cans to this summer’s canned Proper Cider: Raspberry. All canning and packaging takes place at Schlafly Beer’s Bottleworks location.

The seasonal 12-packs of 16-ounce cans of Oktoberfest will be available now through fall across Schlafly’s distribution as well as the Schlafly brewpubs for $14.99 suggested retail. The beer style is also available in 6-pack and 12-pack bottles. For more on Schlafly Beer’s distribution, visit http://www.schlafly.com/beer-finder/.

About Schlafly Beer: Schlafly Beer, Missouri’s largest locally-owned, independent craft brewery, proudly offers over 60 unique styles of beer. Each is handmade at the Tap Room in Midtown St. Louis or Schlafly Bottleworks in Maplewood. Utilizing 102 hop varietals, 77 malts and grains, 59 different spices and fruits and 10 separate yeast strains from around the globe, Schlafly also works with local suppliers for everything from farm-fresh food to packaging and labeling. As part of its commitment to sustainability, Schlafly donates spent grain to local farmers to feed their livestock and utilizes 100% renewable energy throughout its operations. The largest Missouri-owned-and-operated beer maker offers free tours of the Tap Room (2100 Locust Street) every Sunday from 12:30 p.m. to 4:30 p.m. on the hour and Schlafly Bottleworks (7260 Southwest Avenue) from noon to 5 p.m. every half hour on Fridays, Saturdays and Sundays. The brand continues to define craft across 12 states and throughout countless fine establishments, backyards and basement bars.