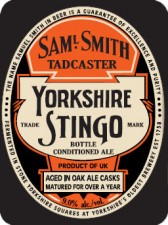 Merchant du Vin and Samuel Smith’s Old Brewery are proud to announce the fifth U.S. annual release of Samuel Smith’s Yorkshire Stingo. This barrel-aged, bottle-conditioned strong ale expresses the elegant refinement of every Samuel Smith’s beer, but with depth, length and power found in no other beer. This is a must-try beer: Extreme meets over 250 years of brewing experience.

Vintage dated, Stingo is available nationally each year around England’s “Yorkshire Day,” August first. This 2013 release was brewed in 2012, then matured for a year at the brewery. ABV varies a bit each year – this year, Stingo fermented to 9.0% ABV. Production of this fine ale will always be extremely limited.

A traditional strong ale that originated in the north of England, “Stingo” is mentioned in literature before 1700. Samuel Smith’s Stingo melds the signature elegance of the brewery’s ales with a long historical tradition. Brewed from British malts and multiple hop varieties, Stingo is fermented in open-topped stone Yorkshire Squares, then aged in oak barrels that previously held cask-conditioned ale, gaining subtle complexity from the wood. Some of the barrels at Samuel Smith’s are over a century old – if a cask is damaged, the coopers carefully replace broken staves and put the cask back into service.

Samuel Smith’s Stingo shows rich, superb flavors of toffee, raisin, dried fruit, and caramel; waves of flavor ascend and ebb leaving soft oak notes. Hops add a perfect enhancement to dramatic malt and fermentation flavors, but without pushing bitterness past the point of balance. Bottle conditioning – that is, including live yeast in each bottle – produces soft carbonation, a fruity aroma and finish, and allows Stingo to age and develop in the bottle.

Serve Stingo alone as the ultimate digestif, or pair with beef, wild game, or demanding deeply-flavored foods like pickled fish or strong aromatic cheeses. Try with lamb, duck, smoked meats, or Kalamata olives; serve in a nonik glass or red wine glass and remember to pour gently, leaving the remaining brewers yeast behind in the bottle.