Samuel Adams / Boston Beer Company has just sent out this press release, where they share plans of reformulating their successful product Rebel IPA. It would appear that this is an effort to compete against more favorable west coast style IPAs from the likes of Lagunitas, Ballast Point, Firestone Walker and Stone. You will notice that not only are they featuring a new variety of hops, but they are attempting to dial back that heavy malt body that Rebel is known for.

(BOSTON, MA) –  For the first time, the brewers at Sam Adams have completely reformulated a popular flagship beer: Rebel IPA.  After more than four years, the brewers undertook what they called “Project Lupulus,” an experiment that takes advantage of hops that were not readily available or have been newly cultivated since Rebel IPA first launched in 2014. As part of this project, the brewers collaborated, starting in 2013, with a hop breeder in Yakima Valley, WA to create a new hop variety proprietary and exclusive to Sam Adams called HBC 566. After months of experimenting with dozens of trial batches at the Boston Brewery, the brewers are now ready to release the new Rebel IPA recipe which is brewed with HBC 566 and another new experimental hop variety for bittering, HBC 682.  Rebel IPA now has a more intense juicy, tropical and citrus flavor supported by a leaner body and a crisp, clean finish to optimize the hop character. 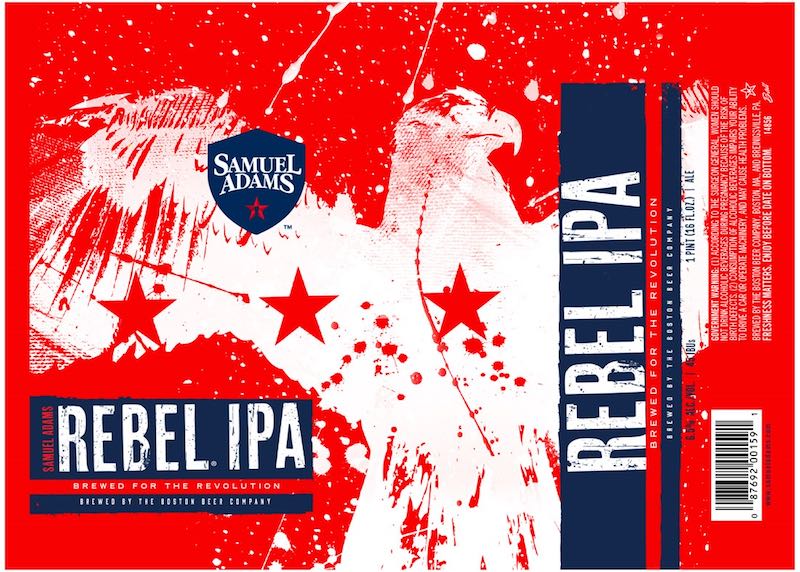 So what changes? Paying homage to the original recipe, Rebel IPA is brewed with a few of the original hop varieties including Cascade, Centennial, Simcoe® and Chinook. For the 2017 release, the brewers added Mosaic hops, alongside HBC 566, a new hop proprietary to Sam Adams, and HBC 682, a new, experimental bittering hop.

Project Lupulus refers to the scientific name of a hop, Humulus lupulus, and its special lupulin glands which are the fundamental source of flavor, bitterness, and aroma in hops. For Project Lupulus, the brewers looked to optimize the flavor of each hop variety by changing up the blend and ratio of hops for the new Rebel IPA. Ultimately, seven hops were chosen for their unique character, including:

To dial up the hop impression, the newly reborn Rebel IPA removed caramel malt from the grain bill and now is brewed only with Samuel Adams special two-row malt blend.  By removing the caramel malt, Rebel IPA’s body is less malty, resulting in a cleaner, brighter IPA with more tropical, citrus, and pine-forward notes.

“This is the first time we’ve significantly changed the recipe of a flagship beer.  As hop varieties evolve, we want to use the new varieties to keep brewing the best beer possible,” said Jim Koch. “Like with the original Rebel IPA recipe, this release isn’t a palate-scorching hop-bomb. Our goal was to showcase the intricate aromas and flavors of hops, especially with new, experimental hop varieties HBC 566 and HBC 682. Not that long ago, it was a challenge just to find quality, flavorful hops and now, we’re developing our own proprietary hop with unparalleled lemony-lime, orange and eucalyptus notes. It’s wild to think how far the brewing industry has come and that today, a beer can evolve.”

“Even before we started brewing Rebel IPA, we were exploring the many varieties of hops and how they affect the flavor of a beer with Project Lupulus,” said Brewer Megan Parisi, who manages the nano brewery. “We averaged at least one new test brew in the nano each week since we started tinkering with the Rebel IPA recipe and our new hop varieties. It was awesome being able to brew with a new hop variety that had never been used. After dozens of test batches of single hop brews, various blends, and of course, taste testing, it is a pleasure to finally share our new Rebel IPA recipe with drinkers.”

About the Rebel IPA Family

Rebel IPA was the first beer that originated in the Samuel Adams Nano Brewery, the epicenter of experimentation for new beers located within the Boston Brewery. When Samuel Adams launched Rebel in 2014, the brew became the most successful release of a craft beer brand [1]. Now, IPAs are the primary driver of craft volume growth1. Since 2014, the Rebel family has expanded to include Rebel Rouser Double IPA, Rebel Grapefruit IPA, and Rebel Juiced IPA.

In January 2017, Samuel Adams Rebel Juiced IPA, a West Coast IPA infused with mango, will be now available in cans and bottles. At 55 IBUs, the brewers selected the hop varieties based on their tropical aromas and juicy flavors rather than for their bitterness. Zeus hops were used in the kettle and Mosaic and Mandarina hops were used to dry hop. The result is a medium-bodied beer with a slightly veiled golden color that brings a big tropical aroma of guava, passionfruit and mango.

To find where Samuel Adams beers are sold near you, visit www.samueladams.com/find-a-sam.

ABOUT THE BOSTON BEER COMPANY

The Boston Beer Company began in 1984 with a generations-old family recipe that Founder and Brewer Jim Koch uncovered in his father’s attic. Inspired and unafraid to challenge conventional thinking about beer, Jim brought the recipe to life in his kitchen. Pleased with the results of his work, Jim decided to sample his beer with bars in Boston in the hopes that drinkers would appreciate the complex, full-flavored beer he brewed fresh in America. That beer was aptly named Samuel Adams Boston Lager, in recognition of one of our nation’s great founding fathers, a man of independent mind and spirit. Little did Jim know at the time, Samuel Adams Boston Lager would soon become a catalyst of the American craft beer revolution.

Today, The Boston Beer Company brews more than 60 styles of beer. It relentlessly pursues the development of new styles and the perfection of classic beers by searching the world for the finest ingredients. Using the traditional four vessel brewing process, the Company often takes extra steps like dry-hopping, barrel-aging and a secondary fermentation known as krausening. The Company has also pioneered another revolution, the ‘extreme beer’ movement, where it seeks to challenge drinker’s perceptions of what beer can be. The Boston Beer Company has been committed to elevating the image of American craft beer by entering festivals and competitions around the globe, and is one of world’s most awarded breweries at international beer competitions. As an independent company, brewing quality beer remains its primary focus. Although Samuel Adams beer is America’s leading craft beer, it accounts for only one percent of the U.S. beer market. The Boston Beer Company will continue its independently-minded quest to brew great beer and to advocate for the growth of craft beer across America. For more information, please visit www.samueladams.com.

[1] Off-Premise Sales measured by IRI for 2016 with analysis by the Brewers Association.