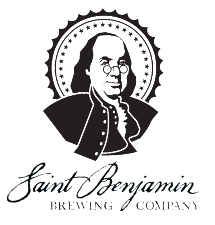 (Kensington, PA) – This October, local nanobrewery Saint Benjamin Brewing will host the Philadelphia leg of Brooklyn Brewery’s Brooklyn Mash. Co-owner and Brewer Christina Burris will participate in a live podcast recording with some of the top names in craft brewing, State of Craft Beer, examining the industry as it is today and as it is likely to grow in the future. State of Craft Beer is just one of nearly a dozen great opportunities for fans and first-time drinkers alike to get to know Philadelphia’s most exciting new craft brewery, located in the burgeoning Kensington neighborhood:

On Thursday, October 22 beginning at 6 p.m., Saint Benjamin will host State of Craft Beer, the definitive discussion of the craft beer industry in the United States featuring national and local leaders

Saint Benjamin will also participate in a wealth of other October beer events: