(HOUSTON, TX) – Saint Arnold Brewing Company , the oldest craft brewery in Texas, describes Santo as black Kölsch, but an elite international panel of judges considers it a world-class example of American-Style Dark Lager. Over the weekend, Santo earned its second consecutive medal in the American-Style Dark Lager category, this time taking Silver, at the World Beer Cup gala and awards ceremony at the Hyatt Regency Centennial Ballroom in downtown Denver. 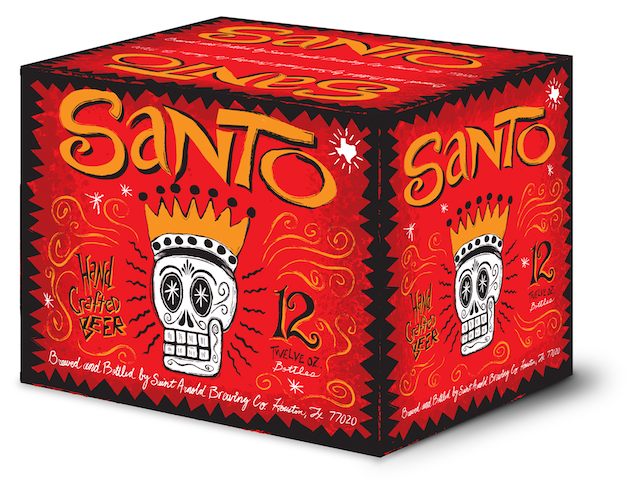 This is the 11th World Beer Cup medal won by Saint Arnold Brewing Company. The 10th biannual competition, the 2014 World Beer Cup featured a record 1,447 breweries from 62 countries and nearly 5,000 entries in 94 beer-style categories. It is considered one of the two most prestigious beer competitions in the world along with the Great American Beer Festival. Saint Arnold has been recognized with 18 Great American Beer Festival medals.

Originally released in 2011, Santo has quickly become one of Saint Arnold’s top selling beers. Despite its dark color, Santo maintains the light bodied and floral characteristics of a true Kölsch, even though it has a distinctive dark malt flavor. Saint Arnold uses the same special Kölsch yeast – an ale yeast that ferments at almost lager temperatures – that is used in Saint Arnold Fancy Lawnmower Beer.

“The Santo recipe took the longest to develop – five years – of any beer we’ve released,” said Saint Arnold Founder/Brewer Brock Wagner. “Being recognized for our quality and creativity by the World Beer Cup judges is an affirmation of our mission to consistently brew world class beers.”

Santo is currently available throughout Texas, Louisiana and in parts of Florida and Colorado in 6-packs of 12-ounce bottles and on draft. This week Saint Arnold is introducing 12-packs of Santo.

Santo is brewed using pale two-row and pils malted barley, a dash of malted wheat and an addition of dark malt. Saint Arnold uses Hallertau Hersbrucker hops, added to the brew kettle in four separate cycles to create a delicate flavor and aroma. It has an original gravity of 1.045 (11.4° Plato), bitterness of 15 IBU and alcohol content (by volume) of 4.9 percent.

Also over the weekend, Saint Arnold fielded the second largest team participating in the BP MS 150 with 404 cyclists. The team’s ride from Houston to Austin has raised $265,000 to date for the National Multiple Sclerosis Society.

Saint Arnold Brewing’s 17 brews are made and sold by the company’s staff of 58 dedicated employees. Ranked 45th on the Brewers Association list of top craft breweries, Saint Arnold was listed by USA Today as one of the “10 great places to see what’s brewing in beer,” and Smart Meetings magazine named it among the “Top 5 breweries to host an event.” Saint Arnold is located at 2000 Lyons Avenue and its brewery tour and tasting is offered every weekday at 3:00 P.M. and Saturdays starting at 11 A.M. For more information on Saint Arnold’s seven year-round and five seasonal beers as well as root beer, log on to www.saintarnold.com.