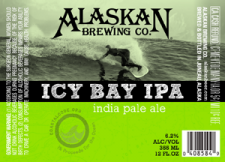 Juneau, AK – Alaskan Brewing is pleased to welcome Icy Bay IPA to our year-round lineup – a refresh on the original Alaskan IPA recipe. The new Icy Bay IPA recipe includes more hop intensity in aroma and flavor, and more hop complexity with the addition of Bravo and Calypso along with the Cascade, Summit and Apollo hop flavors that have always been in Alaskan IPA. The new beer also features a higher IBU without losing the balance of a great malt backbone.

As inspiration for the new flavor profile, the Brew Crew looked to the intense experience of Alaskans who travel the state’s coastlines in search of epic surf. One of those Alaskans is photographer Scott Dickerson, who provided the photo now on bottles of newly-released Icy Bay IPA.

“The photo on the label is of my brother, Frederick, surfing the waters near Yakutat – one of Alaska’s most amazing surf destinations,” said Dickerson. “That was on a mid-winter trip where we explored and surfed across 800 miles of coastline in the fishing boat Milo.”

“One thing I love about Alaskan Brewing is just knowing that the inspiration they draw from when crafting their beers is the same rugged and beautiful wilderness areas that entice me to be out here exploring for surf.”

The surfers who ride the waves around Yakutat and Icy Bay have to be prepared for all of the extremes that come with Alaska’s maritime climate. That can mean air temperatures well below freezing, and water temperatures not too much higher. It’s sometimes called blue face surfing, and it requires a special breed of adventurer to seek out the rugged shorelines that yield the best breaks.

Dickerson said another thing Icy Bay IPA has in common with his adventures, also happens to be the answer to the question people ask him most about Alaskan surfing. “Yep, it’s cold.”