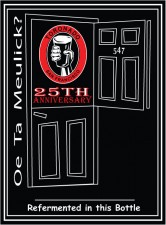 We would like to wish Dave, Jennifer, and the entire gang at the Toronado San Francisco a big Happy 25th Anniversary!    You might remember when we made a special beer for their 20th Anniversary (I think I remember parts of that week ;-). Of course, we could not resist the temptation to honor them again with another special concoction. What style of beer is it? Vinnie, the mad scientist, says it is a “sour barrel-aged disproportionate blend of 6 different beers”. Upon tasting it this morning, I would say the beer itself is as big a mouthful as the description! The 6 different components were brewed separately with distinctly different processes, then Vinnie and Dave decided on the final blend together. It is 100% bottle conditioned and has brettanomyces, lactobacillus, and pediococcus.  ABV is 8.75%.

Toronado 25th Anniversary beer will be released on Thursday, August 9th, on draft and in the bottle at the pub. The kegs will be tapped when we open at 11am.  Then we will release the 750ml bottles when the bus arrives from the Toronado that night for the big shindig and Big Daddy is in the house!   Bottles are $25 each, limit 2 per person. We are going to release about 25 cases (appropriately, but not planned) every day starting Thursday night, then Friday, Saturday, and Sunday morning upon opening.   If you want to stop by just to buy bottles, please come Friday, Saturday, or Sunday.   We will not be allowing folks in just to buy bottles on Thursday night as we will be focused on throwing the best party ever!

Thursday nights event is open to the public and FREE, but the semi-private Toronado Party will be taking over the entire dining room starting at about 6pm. If you are planning to come, please be prepared for a busy night and perhaps a wait to get in. It is definitely 21 and up on Thursday. American Dog takes the stage at 9pm! We will be handing out FREE earplugs for anyone interested!

Toronado San Francisco will, of course, also be serving this special beer but not until their official Anniversary Party on Saturday, August 11th. If you would like more information about their event, please contact the Toronado.

That’s it for now. I have a lot to do to get ready for Thursday’s festivities!