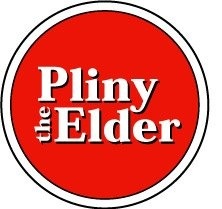 Santa Rosa and Paso Robles, CA – As you may well know, the folks at Russian River Brewing Company struggle everyday to supply an ever-increasing demand for their very popular Double IPA, Pliny the Elder. In 2008, Vinnie and Natalie Cilurzo, Co-owners of the brewery, got a screaming deal on used brewing equipment from their friends at Dogfish Head Brewing in Delaware. With this used equipment they were able to afford to build a new production brewery and increase their output from 3,000 barrels (31 gallons per beer barrel) at their pub to now just over 14,000 barrels annually. After 6 hard years of cranking out as much beer as possible, the 50-barrel kettle and mash tun’s days are numbered. The writing was on the wall for the brewing couple and a brand new brewhouse purchase was inevitable. They have secured production of a new 4 vessel 50-barrel brew house from AAA Metal Fabrication in Oregon. Their shiny new brew house is expected to be delivered and installed in February 2015.

Since this is an equipment swap, there will be no way to brew at their production brewery for about a month. This will not only affect beer sales at their pub, but wholesale distribution since all packaged beer is brewed at this facility (Pliny fans should be gasping right about now). Alas, have no fear! Vinnie and Natalie’s good friends at Firestone Walker Brewing Company have graciously offered to brew several batches of Pliny the Elder to keep the beer flowing during this downtime at Russian River! Firestone Walker will brew Pliny the Elder for draft distribution only, and bottled Pliny will continue to come from Russian River through existing inventory in their fermenters. Vinnie will be working closely with Brewmaster Matt Brynildson to dial in the Pliny recipe in an effort to maintain flavor consistency. If you are at all familiar with the Firestone beers, you know their brewing practices and quality are already first class!

Vinnie and Natalie are grateful to their friends at Firestone Walker for helping them out during installation of the new brew house in February. It’s not exactly like borrowing a bag of malt! The ability to have an uninterrupted supply of draft Pliny the Elder for their wholesale partners and, especially, consumers is invaluable to them and the brewery. This is a true testament to the continued collaborative spirit and friendly nature of the Craft Beer Industry.

*Please understand this is not an announcement that we are expanding capacity! As stated many times before, there is no possible room to make anymore beer at either brewery. Making better beer is always our number one priority. We are super excited about this joint endeavor with our friends at Firestone! We have such great respect for each other and completely trust they will take good care of our eldest baby!