(Newport, OR) — Thirsty hop-heads looking for an unforgettable drinking experience can celebrate as Rogue Ales & Spirits’ massively hopped Straight Outta Newport…Oregon double IPA returns in January for a limited time. With the ABV amped up to 8.7%, this uncompromising beer bursts out of the can delivering intense notes of tropical fruit and citrus. 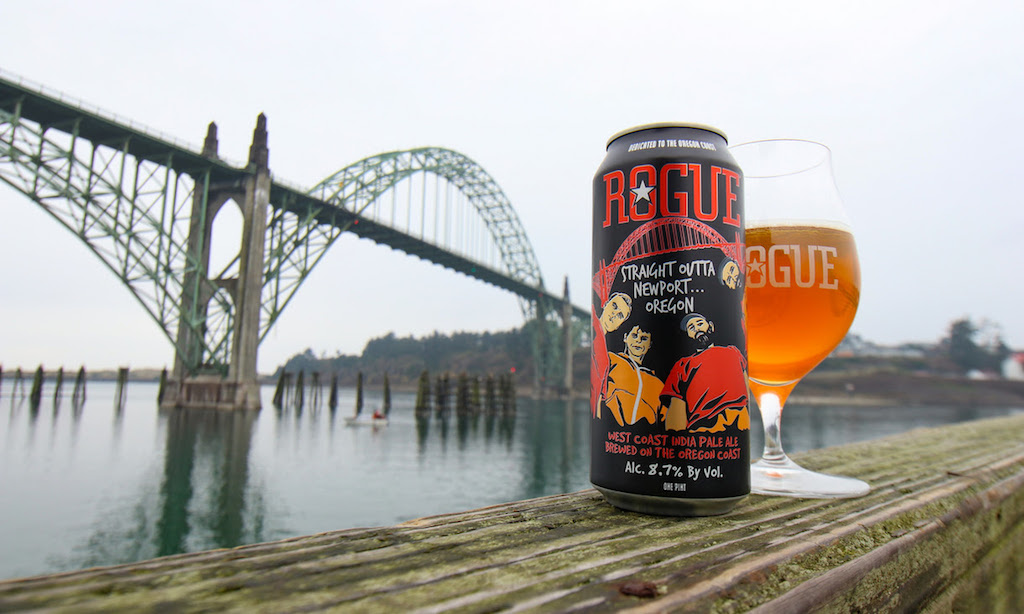 “This is our biggest and boldest IPA packed with ridiculous amounts of Citra, Mosaic and Comet hops,” says Innovation Brewer Michael King. “The beer upends expectations for double IPAs—it has huge hop character and flavor but is surprisingly easy to drink.”

Straight Outta Newport’s label art pays homage to Newport’s iconic Yaquina Bay Bridge and the Rogue brewers who collaborated on crafting this beer. “By looking at the Straight Outta Newport can, you can see exactly what matters to us: our coastal roots and the brewers who create the incredible beers we drink,” says Rogue General Manager Dharma Tamm.

Straight Outta Newport…Oregon will be available in January nationwide for a limited time in 16 ounce four pack cans and on draft.

Use the Rogue Finder to find Straight Outta Newport near you and learn more about it at Rogue.com.

Rogue Ales & Spirits, the only farmer-brewer-distiller-cooper in the United States, was founded in Oregon in 1988 as one of America’s first microbreweries. Rogue has won more than 1,900 awards for taste, quality and packaging, and is available in all 50 states as well as 54 countries. Proudly rooted in Oregon soil, Rogue’s beers, spirits and sodas are made with ingredients grown on Rogue Farms in Independence, Oregon. Rogue Spirits are hand-distilled on a 550-gallon still in Newport, Oregon, aged in the thick ocean air of the Yaquina Bay and bottled by hand. Since 2008, Rogue has shared the terroir of Oregon by growing its own hops, barley, rye, wheat, honey, cucumbers and pumpkins and using them in beers.