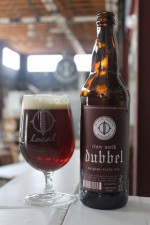 But every once in a while, you have to pay homage to your roots.

River North Dubbel will debut Saturday, April 20th, at 1pm in the Denver taproom, located at 2401 Blake Street. Both draft pours and bombers-to-go will be available. Eighty cases were bottled in total, the remainder of which will ship to Denver Metro-area stores the following week.

That leaves only two unexplored Abbey-styles, tripel and enkel (single), opening the possibility for future creations.

Matt and Jessica Hess opened River North Brewery in downtown Denver on February 18th, 2012. Matt, who walked away from his engineering job in the aerospace industry, heads the brewing operation and focuses on Belgian-style beers and Belgo-American hybrids.

Aside from cranking out creative and unique beers, River North Brewery has cemented itself in Denver’s new beer district, RiNo, establishing close and personal relationships with local residents and businesses. In addition to promoting a “drink local” mentality, River North connects with customers through social media. The brewery hosted a Twitter contest where followers could submit suggestions for fermenter names, with the winning suggestions going on the tanks. The two winners: “Think Tank” and “The Louis Pasteur Cultural Events Center.”

River North Brewery produced 295 barrels in 2012, a number expected to triple this year.