A creepy cartoon character that’s still kinda cute prowls around the otherworldly outbuildings appearing to belong to some absent Venusian pasha; frogs wink in a weird, super-cranial way; Jesus and the bear with whom he’s just been grappling (both a little the worse for wear) sit down for a slobbery catechetical lesson amid a craggy Flemish landscape.  These are the visions of Seattle artist Jim Woodring, self-avowedly not his worst–but then there’s Manhog.  But what does this have to do with beer? 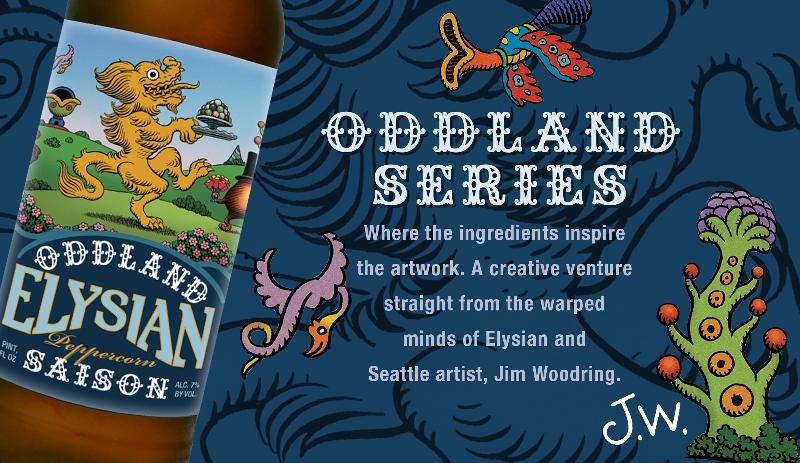 Good question.  Emboldened by their 2012 Twelve Beers of the Apocalypse series, in which they combined inspiration, weird ingredients and logistical legerdemain as a run-up to the Mayan end of the world, the brewers at Elysian Brewing in Seattle are collaborating with Woodring to create Oddland, an intermittent series of beers in which the artist is an active participant.  Weird ingredients are once more very much the order of the day–black, green, white and pink peppercorns for the first go, pears, cumin and cardamom for the second, and who knows what for the third–focused, inverted, enlarged and then made small again through the Woodring lens.  The labels will both disturb and amuse you; the beers intrigue, refresh and engage you.

Here’s how the whole thing works.  Head Brewer Dick Cantwell and his brainstormy gang get an idea; they run it by Woodring, who sketches his two cents’ worth and sends it on back; then the recipe is tweaked, the ingredients secured, suggestions made as to visual format, and away we all go, to Oddland.  Fantagraphics Books once more is the go-between, long-standing custodians of Woodring’s work and the hookup between Elysian and Charles Burns, the artist whose panels and covers from his book Black Hole adorned the labels for the Apocalypse series.

The Oddland Peppercorn Saison will hit stores (in 22-ounce bottles), restaurants and bars (on draft) and Elysian’s own taps around May 15 of this year.  The fire of black and green, the sparkle of white and the pungent fruitiness of pink, combined with a super-cool gold-foiled label, will be sure to capture every sense but hearing (but who’s counting?)  After that it’s on to the next weird little journey.

Jim Woodring was born in the foothills of the San Gabriel Mountains in Southern California and enjoyed an exciting childhood full of poetry and paroniria among the snakes, rats and tarantulas of that enchanted realm. He eventually grew into an inquisitive bearlike man who has had three exciting careers; garbage collector, merry-go-round-operator and cartoonist. His work has been collected in several books from Fantagraphics and in various toys, fabrics, prints and urban legends.

Located in Georgetown, Seattle, WA Fantagraphics Books has been a leading proponent of comics as a legitimate form of art and literature since it began publishing the critical trade magazine The Comics Journal in 1976.