(CHICAGO, IL) – ​Revolution Brewing is teaming up with hometown rock band Chevelle for the release of La Gargola, a classic German-style Helles lager and the band’s first brewer collaboration. To celebrate, the brewery and band will be throwing a post-Lollapalooza party at the Revolution Brewpub (2323 N. Milwaukee Ave.) on Thursday, August 1 – the night before the band’s set at the Chicago music festival. Pours of La Gargola will be available, and Chevelle will be in attendance. 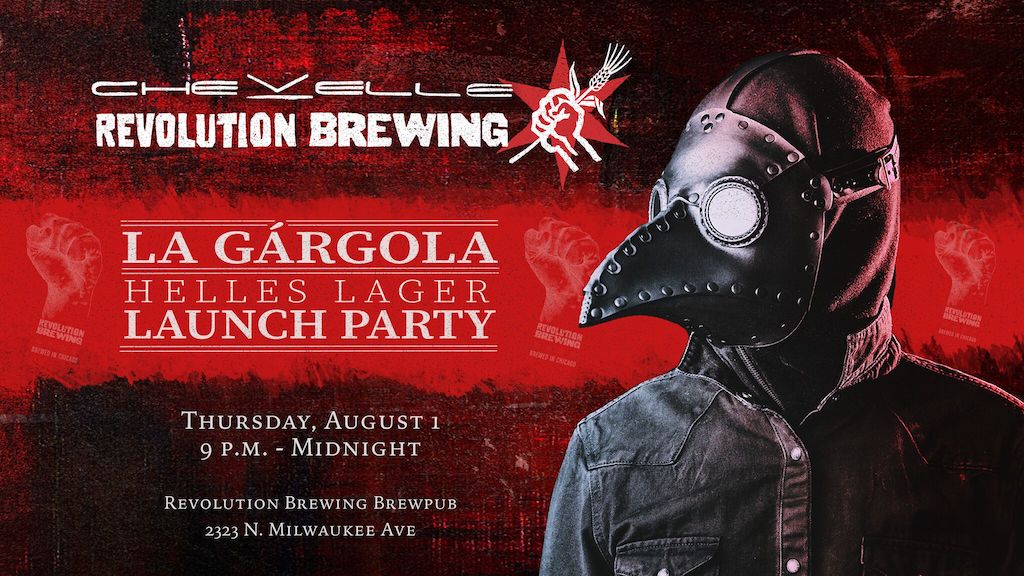 “We are incredibly excited to announce our collaboration beer with Revolution Brewing. We chose a Helles-style Lager because we wanted a beer that was easy-drinking and did not sacrifice taste or quality,” Chevelle frontman Pete Loeffler said. “Being from the Chicago area, we’ve been fans of their beers for as long as we can remember. Having the opportunity to work on our own special edition with one of our favorite breweries is a special moment for us.”

“One thing that stuck out to me in talking with Pete and the guys was the comparison between making beer and making music.Finding out what works and what doesn’t is almost equally important, just like writing music,” Palos said. “It really struck us that a classic beer, influenced by the Reinheitsgebot [the 1516 Bavarian beer purity law] was the perfect fit. This style forces you to dig deeper to find the soul or character of the beer instead of just throwing a bunch of crazy ingredients at it. You build that complexity subtlety, and creatively, with the tools at your disposal – just like the work that goes into a good song.”

Revolution Brewing is the largest independently owned brewery in Illinois, brewing ​only​ in Chicago between the original brewpub space in Logan Square and a production brewery and taproom in Avondale.