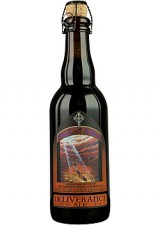 As you may or may not know, Ratebeer and BeerAdvocate communities tend to be a small, yet very vocal  group of beer enthusiasts.  When something upsets either one of these groups, they “take it to the boards” for discussion (sometimes constructive, sometimes not).

It’s been reported in this thread [ http://www.ratebeer.com/forums/infected-deliverance_225909.htm ] that a few people have experienced multiple bottles of infected Angel’s Share 2012 bottles and infected Deliverance 2012 bottles.

This is not a new story by any means.  Over the last 6 years, Lost Abbey has made news for having bottling issues, in particular with the Angel’s Share Barleywine brand. One year, it was reported as flat, one year it was reportedly a gusher, one year they made an Angel’s Share Grand Cru that was reported as being 1 in 8 bottles being infected.  Port Brewing/Lost Abbey attempted to curtail these issues when they hired on Flying Dog’s Gwen Conley to lead up quality control.  We were assured on the record that these types of issues were being addressed by Gwen, and that other measures taken in the brewhouse and bottling line would make this old news.

Gwen popped onto the thread on ratebeer and had this to say about the allegations:

Hello Everyone – Apparently you all have infected 2012 Bourbon Angel’s Share and 2012 Deliverance. I can tell you that every single one of these barrels was sampled and had micro testing on them. If a barrel comes back with a positive for either wild yeast or bacteria it is dumped down the drain. Once the barrels are filtered into the Beer Brite Tank, micro testing is done again to confirm there is no contamination of wild yeast or bacteria. After the beer is packaged, micro testing is done on a bottle from the begin, middle, and end of the run. These beers are not packaged with the same equipment as any of our sour beers, to also eliminate the possibility of contamination. I have pulled bottles from our supply and we all gladly did a sensory check this morning and neither the Angel’s Share or the Deliverance tastes infected. I will redo all of the micro testing to ensure that they are not infected. If you feel that you have an infected bottle that is unopened I do want to hear from you.

Firstly, this is a drastic improvement for Lost Abbey’s PR.  We wouldn’t have seen a public note about this in the company’s infancy years ago, it’s very amicable they stuck their neck out like this. However, if these allegations are true, this seems very troublesome that the problems Port Brewing/Lost Abbey’s early markets experienced are now being experienced in their new east coast markets.  $17 – $20 a bottle for anything less than primo beer just isn’t acceptable this day in age, especially with all the other premium options on the market.