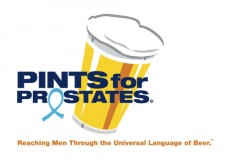 Charlotte, N.C. – People will be able to raise a glass of beer to your health and really mean it during September, thanks to a cooperative effort between Jolly Pumpkin Artisan Ales of Michigan, The Rare Beer of the Month Club, which ships unique craft beers nationwide, and Shelton Brothers, one of the leading craft beer distributors and importers.

Biere de Goord, a saison brewed with kale, pumpkin seeds, pumpkin and green tea, was made by Jolly Pumpkin to help raise awareness about prostate cancer and generate funds for the Pints for Prostatescampaign. The Rare Beer of the Month Club has joined the effort by making the beer one of its selections during National Prostate Cancer Awareness Month in September. Shelton Brothers, which handles Jolly Pumpkin, is donating its services to the effort.

The beer will feature the Pints for Prostates logo on its label, which includes the blue ribbon to remind people of the ongoing search for a cure to prostate cancer, a leading cause of death among American men. A donation of $3 from every 750 milliliter bottle of Biere de Goord sold will be made to the Pints for Prostates campaign.

“Pints for Prostates is reaching men through the universal language of beer and now for the first time we are doing it with a special beer that carries a message urging men to get regular prostate health screenings,” said Rick Lyke, a prostate cancer survivor who founded Pints for Prostates after successful prostate cancer surgery in April 2008. “We’re thrilled that Jolly Pumpkin, The Rare Beer Club and Shelton Brothers have joined our campaign in a way that will catch the attention of men needing to hear our message.”

When this very limited batch of Biere de Goord is gone, it is gone. There are only three ways for beer lovers to try the unique farmhouse-style ale:

“At Jolly Pumpkin we are super excited to be involved in this project.  We were flattered and honored when we were asked to come up with a special beer to help raise awareness of the Pints for Prostates campaign,” said Ron Jeffries, President of Jolly Pumpkin.  “It gave us the chance to stretch our collective imaginations and come up with a saison that not only tastes fantastic, but is full of ingredients rich in lycopene.  While we can make no health claims about Biere de Goord, we wanted to use the project to do a little education for men about some of the foods that contain lycopene, which many researchers point to as being essential for prostate health.”

“When Rick first approached us for this project, I immediately felt that it was a perfect fit for The Rare Beer Club.  The beer that Ron created for us at Jolly Pumpkin defines the essence of what we’re striving to bring to our members each month, creative, limited release, rare and outstanding craft brewed beers.  The cause is a noble one.  A little education and early detection goes a long way to save lives and we’re proud to be a part of this effort,” said Kris Calef, President of the Rare Beer Club.

“Shelton Brothers is proud to be associated with this project and get the chance to bring a Pints for Prostates beer to life,” said Ron Extract, Vice President of Shelton Brothers. “We’re quite pleased to be working with one of our brands, Jolly Pumpkin, and The Rare Beer Club on this project. The beer fits perfectly with our mission to bring consumers exceptional brews from great brewers. In this case the beer even comes with a message to men about protecting their health so they can enjoy great beer for years to come.”

Since launching in late 2008, Pints for Prostates has reached approximately 100 million people through a combination of donated advertising, publicity, appearances at beer festivals, and coverage on websites, blogs and social media outlets. In 2009, the program was featured at the Livestrong Global Cancer Summit in Dublin, Ireland, and profiled on CNN’s Vital Signs hosted by Dr. Sanjay Gupta. During the 2010 NHRA season Bob Yonke and the Yonke Motorsports Pro Stock ran several races with Pints for Prostates as the primary sponsor on the hood of its car. In April, a team of athletes from Columbus, Ohio, ran with prostate cancer survivor Patrick Grubbe in the Boston Marathon wearing uniforms with the Pints for Prostates logo.