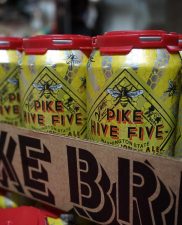 (Seattle,WA) – Pike Brewing Hive Five is now available year-round in eye-catching 12 oz. cans. With a surprisingly dry and crisp flavor and a slight clover like essence of honey at the finish, Pike Hive Five is springtime in a glass. This light and flavorful hopped honey ale comes to cans just in time for beer lovers to take along on picnics, hikes and long days on the water.

Pike Hive Five won the gold at the Washington Brewer’s Festival during its limited seasonal release in 2016. Salish Lodge & Spa has 120,000 honey bees that live in their apiary above Snoqualmie Falls.

Pike Hive Five is the second beer from Pike Brewing Company to be canned, following Pike Space Needle Golden IPA. It is available now at retailers around the greater Puget Sound area and at The Pike Pub.

Pike Hive Five is available now at Puget Sound area retailers and at The Pike Pub. This is the second can from Pike Brewing Company, following Pike Space Needle Golden IPA.