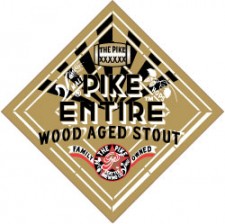 Pike Entire is a blend of three beers: Pike’s XXXXX Extra Stout, original gravity 10.73 / alcohol 7.00%; the same beer aged for more than half a year in oak Bourbon barrels; and an Imperial Stout original gravity 10.98 / alcohol 12%. The Entire blend contains 42.7% barrel aged beer and finishes at 9.5% alcohol. The taste is complex with velvety malt tones, a coffee aroma, and a palate and finish of bitter chocolate.

The biscuity character of pale and crystal malts, along with roasted barley, is balanced by a generous amount of Yakima Valley Willamette, Goldings and Columbus hops in the boil; finished with even more Willamette and Goldings. Adding complexity are the underlying wood tones perfumed by the caramel sweetness of wood-aged Kentucky Bourbon. 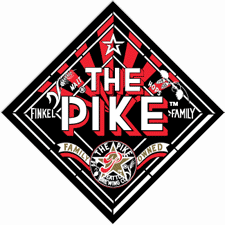 Pike Entire was unveiled for the first time on November 8 at the Washington Beer Lover’s (WABL) Third Anniversary Party in Seattle that featured 20 local “rare and hard to find” beers on draft. The next morning, Seattle P-I beer writer, Geoff Kaiser, commented: “this was everything I hoped it would be…. It had plenty of bourbon and oak character without being overwhelming and it still allowed the stout to do most of the work. Quite lovely, and easily my favorite of the night.”

Until the 18th century, malt was “kilned” over wood fires making most beers dark brown or black, and contributing significantly to the pollution in cities like London. The use of coal allowed brewers a little more control, but it was not until coke, a bi-product of coal, was introduced as a fuel that pale malt could be made. Pale malt yielded more sugar than black malt. Because the Thames was polluted, soft water was drawn from wells, ideal for dark beers, but yielding unpleasant flavor to black beers unless they were blended with the paler beers made by country brewers who had access to hard water. These country brewers also bought dark beers from London and aged them in large oak casks. After aging they sold them back to the London brew pubs as highly desirable, “stale” (aged) beer. Home brew houses then began to blend the black, pale, and stale beers and the result became known as “three threads”, a corruption of “three thirds.” Ralph Harwood’s Bell Brewhouse, one of London’s original common brewers and was the first to market an already blended beer to other pubs, called “Entire”. It is believed that he blended his own black beer with purchased pale and stale. Since it saved publicans the chore of blending their own three threads, it became an immediate success and the beer style of choice that was sold by London’s train porters. Ultimately the style became known as Porter. As brewing moved away from the brew pub to common brewers, Harwood’s creation became London’s great contribution to beer. As the British Empire expanded, “Porter,” later known as “Stout Porter,” then simply “Stout,” became the world’s most widely distributed beer style.

In order to brew a beer in keeping with the original style but still distinctly American, Pike acquired oak Bourbon barrels last year and filled them with Pike XXXXX Extra Stout in April 2008 to be blended back. Pike Head Brewer, Drew Cluley, describes the beer as “complex and chocolaty with a great vanilla wood overtone.”

On Monday, November 24, 2008, Pike Entire, in wax-dipped 22 oz. bottles, will be released. It will have very limited availabilty at the Pike Pub and in select bottle shops, primarily in the Seattle area. A few quarter-barrels will be released for sale on draft. The Pike Pub will tap its one and only quarter-barrel of Pike Entire on Friday, November 28.

The Pike Brewing Company is a family-owned gravity flow craft steam brewery and pub in the heart of Seattle next door to the entrance to historic Pike Place Public Market. Founded in 1989, it was one of the earliest American craft breweries to offer styles like Imperial Stout, IPA, and Barley Wine.