(Pacific City, OR)—Can you feel it? There’s a delicate, warm summer wind wafting around Pelican Brewing Company this week with the release of Sea Breeze Ale—the next in a cocktail-inspired line of Lone Pelican innovations. The limited production small batch brew combines the flavors of fresh cranberries, juniper and citrus peel for an incredibly refreshing and bright beer. Sea Breeze is available now while it lasts in 22 oz. bottles and on draft at Pelican and other participating watering holes. 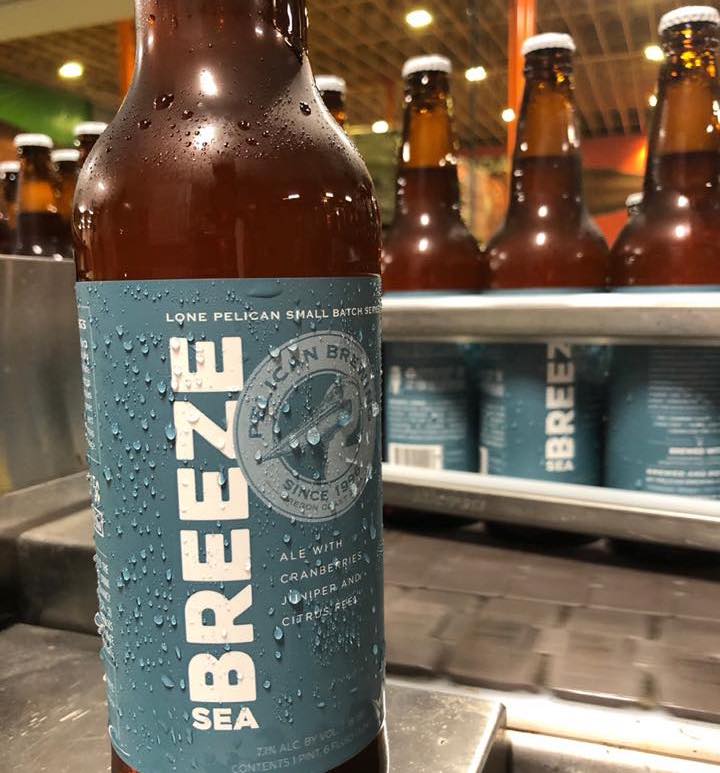 Seabreeze Ale takes inspiration from the original Seabreeze cocktail that marries gin, cranberry juice and grapefruit juice. To bring all the classic flavors to this atypical beer, Pelican added cranberries to the secondary fermentation and then spiced the beer with juniper berries, lemon peel and grapefruit peel. Centennial hops for dry-hopping round out the grapefruit impression and create a beer with incredibly refreshing fruity, tart and citrus characteristics, coupled with the herbal gin-like notes of juniper. Celebrate the return of the sunshine with the brisk bold flavors of Seabreeze.

“The original Sea Breeze cocktail was created using gin not vodka—so we wanted to be true to that fruit-amplified juniper flavor profile,” says Darron Welch, founding brewmaster, Pelican Brewing Company. “There are many words I’d use to describe this brew—it’s fruity, tart, zesty, botanical, herbaceous, balanced, bold, and complex! Sea Breeze is a beer that is long on refreshment with a gorgeous subtle pink hue—a perfect beer for this time of year when the days are longer and it’s clean, fresh and bright outside.”

Like the lone pelican flying independently from the flock, this small batch series flies in the face of convention. The Lone Pelican Series takes traditional beer styles and ingredients and reimagines them to demonstrate the vast spectrum of flavor experiences possible in this wonderful beverage.

Like all Pelican beers, Sea Breeze is born at the beach by a team of award-winning craft beer makers known for brewing styles of beer that they themselves love to drink. Cheers!

Pelican Brewing Company was born at the beach in 1996. Here, in front of a rundown old building at the water’s edge, stood three enthusiastic young folks whose thirst for great beer overshadowed their understanding of what it would take to build a brewery. They did it anyway. Thanks to the vision of founding owners Jeff Schons and Mary Jones, Oregon’s only beachfront brewpub became one of the state’s most popular destinations. And now 24 years later, Pelican Brewing Company is an iconic beach brand and one of the most decorated craft breweries in Oregon. Pelican has been honored with more than 450 awards including the prestigious 2015, 2016, 2017 Australian International Beer Awards Champion Medium International Brewery; 2014 World Beer Cup Champion Small Brewery; 2013 Great American Beer Festival Large Brewpub of the Year. Why? Pelican brews are playful, but not frivolous. Brewed with purpose, passion and a deep respect for the craft. Pelican operates brewing and brewpub facilities in Pacific City, Cannon Beach, and its state-of-the-craft brewery in Tillamook, Oregon where it brews 40,000 barrels of award-winning beer annually and distributes to six states. Pelican’s vision, its beer and values were born at the beach where the team wakes up each day in a place that reminds them that amazing is possible. Cheers, Fellow Fanatics!