(Portland, OR) – Breakside Brewery, known for its innovative, experimental and diverse beers, is offering a wide range of craft styles over the next couple of months. Hitting the shelves and your local taps this month is Rainbows and Unicorns, an annual favorite IPA featuring Galaxy and Comet hops, it shimmers with tropical summery goodness. The brewery will also be releasing Passionfruit Sour in June, a new Lager Series beer and several new barrel-aged, limited releases ranging from stouts to sours. 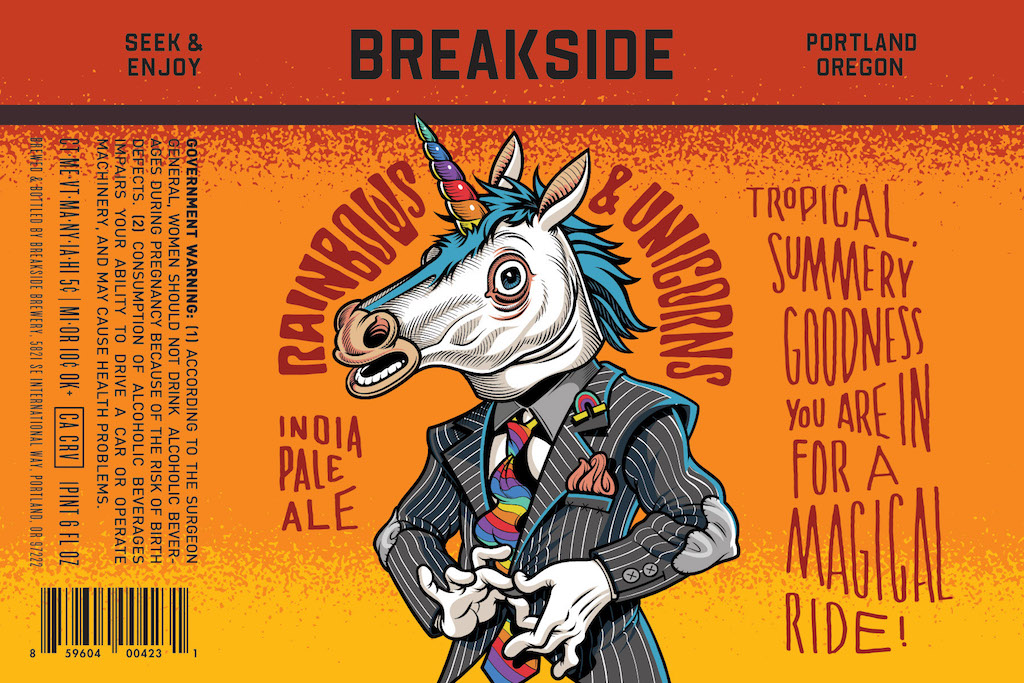 Ben Edmunds, brewmaster for Breakside, said, “This spring sees the return of some of our team’s favorite beers, as well as a few first-time releases. These beers run the gamut from classic styles to innovative sour blends, from low alcohol quaffers to some high-octane stouts aged in some very special barrels.”

Beers that are currently available or coming up soon include:

Rainbows and Unicorns: This session beer was originally designed in 2015, and showcases Eldorado, Galaxy and Comet hops, providing juicy notes of peach, apricot, pineapple, and even stone fruit. Despite all this fruity goodness, this beer toes the line between the “juicier” and “sweeter” style of hazy IPAs, and more classic West Coast hoppy pales. ABV: 5.1% / IBU: 32 / Available now through July 2019.

Grandmammy: The barrel-aged version of Breakside’s popular winter seasonal, Salted Caramel Stout, this vintage release has been sitting for over a year in Van Winkle wheated Bourbon barrels that were also used to house Bissell Maple Farm maple syrup. Think brown spices, earth and dark fruit coupled with the rich flavors of vanilla and caramel with a hint of salt in the finish. Soft oak tannins and a pleasant wood character round this out. ABV: 9% / IBU: 33 / Very limited availability, May 2019.

Grandpappy: Inspired by whiskey-sauced bread pudding, this barrel-aged brew is a special variant of Grandmammy. Also aged for over a year in Van Winkle wheated Bourbon barrels that have been used to house Bissell Maple Farm maple syrup. Aromas of toffee, caramel and baking spice give way to flavors reminiscent of charred oak, sun-dried grapes, and chocolate-covered citrus. ABV: 9% / IBU: 33 / Very limited availability, May 2019.

Louiza: Part of the brewery’s new barrel-aged sour series, this is a mixed culture beer aged on lemon verbena inspired by warm weather drinks like radlers, shandies, iced tea, and fresh squeezed lemonade. The finished blend comes from seven casks of barrel-fermented sour beer that’s been aging for varying amounts of time in the brewery’s wood cellar. Available now in limited quantities, May 2019.

Coldest Beer in Town: This lager is the fifth release in the series and Breakside’s take on a classic Mexican-style lager. To make this beer, Breakside looked to the history of brewing in Mexico, where Austrian and German-immigrant brewers brought continental amber lagers from Vienna and elsewhere to the New World. Over time, these beers morphed into the lighter, easy-drinking Mexican lagers we know and love today. Coldest Beer in Town gets its toasty, cereal-like malt profile from historical Vienna Lagers. This beer is light on the palate and dry in the finish. ABV: 5.6% / IBU: 20 / Available now through June 2019.

Passionfruit Sour Ale: Breakside’s main summer seasonal brew, this award-winning, refreshing sour ale has just a kiss of tropical fruit. Passionfruit Sour is brewed in the tradition of a classic German Berliner Weisse, and then the brewers add a unique, tropical twist. This beer is light in body, extremely refreshing and mouth-puckeringly tart. The addition of passionfruit in the lagering tanks gives this beer an inviting stonefruit aroma. ABV: 5%. / IBU: 3. / Available June – September 2019.

Breakside Brewery opened in 2010 in Northeast Portland as a restaurant and pub brewery. The brewery is known for its innovative, experimental and diverse beers. In 2013, Breakside expanded operations to Milwaukie, OR with a 30 bbl production brewery filled with 30, 60 and 120 barrel tanks, barrel rooms for wild and non-wild/sour fermentations, a high-speed bottling line and a 24-tap tasting room. The brewery expanded to Northern California in 2016 and in 2017 Breakside opened its third location in the Slabtown district of Northwest Portland. In addition to winning several national and regional awards for its beers, Breakside was named Brewery of the Year at the 2019 and 2017 Oregon Beer Awards and the 2018 Best of Craft Beer Awards. Breakside sells on draft and in 22oz bottles in Oregon, Washington, Hawaii, Arizona, Colorado, Idaho, North Carolina, South Carolina, Massachusetts, Northern California, British Columbia and Alberta. www.breakside.com