(Pacific City, OR)—When Pelican Brewing Company’s Coren Tradd set out to design an approachable rye beer that he himself would like to drink, little did he know that his innovation would be an instant success. Soon after it was first brewed, the small-batch draft-only Coast Range Rye was honored with a Gold Medal at the International Beer Awards last spring 2019. 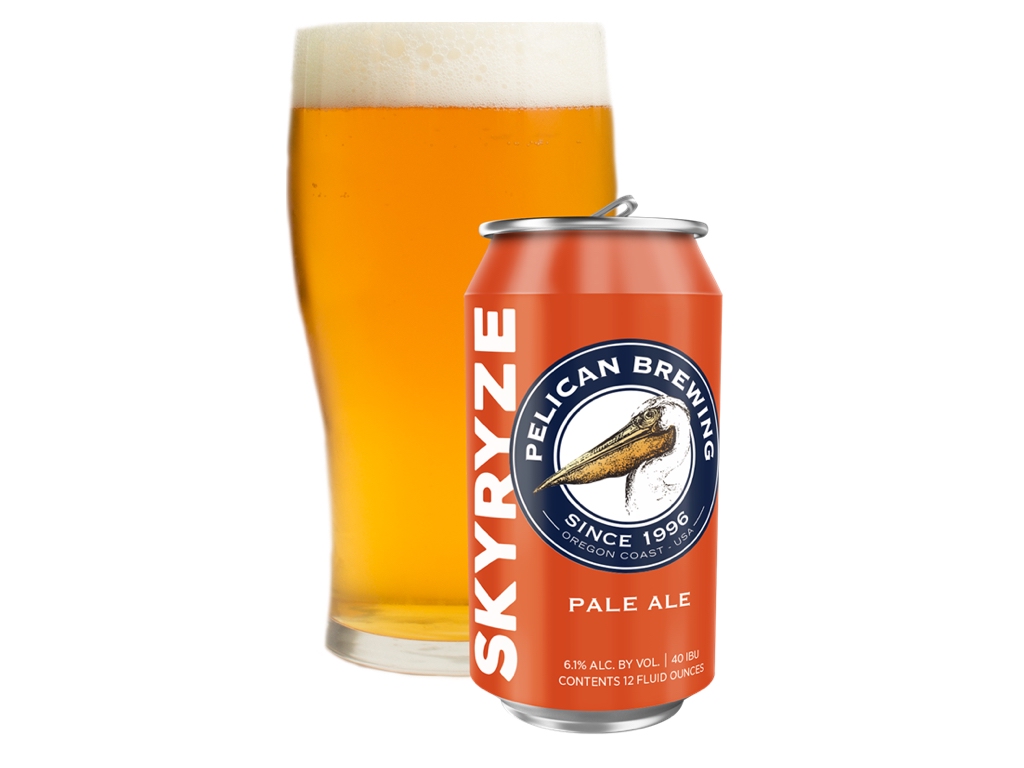 Now, standing on the shoulders of its award-winning predecessor, Skyryze Pale Ale is born for fellow fanatics to enjoy. Skyryze takes its place in Pelican’s rotating canned beer lineup and is available now in craft beer aisles and on-draft at Pelican and other participating watering holes.

“I wanted to design a tasty rye beer that wasn’t overpowering—something mellow and malty that would appeal to a lot of people who want a rye character in a really drinkable package,” says Tradd, head brewer at Pelican’s Cannon Beach brewpub. “Skyryze is a great crisp fall beer that offers an incredibly pleasant and memorable experience.”

Beach fans give a lot of love to sunsets on the Oregon Coast, but a good coastal sunrise is really something special—it takes dedication to witness one, and it’s something you won’t soon forget. Skyryze Pale Ale is similar with its bold malt character coming from Oregon-malted rye and its earthy and floral hop aroma—an unforgettable experience in a can.

Skyryze delights with notes of pumpernickel and a slight rustic spice, as well as a moderate hoppy bitterness. Finishing clean and crisp on the palate, this beer is pleasurably drinkable. Be bold. Watch a sunrise. Drink a Skyryze.

Like all Pelican beers, Skyrze was born at the beach by a team of award-winning craft beer makers known for brewing styles of beer that they themselves love to drink.

Founding brewmaster of Pelican Darron Welch continues to be one of the most decorated brewers in the Pacific Northwest, earning well over 450 medals including several Gold last year alone at the World Beer Cup, Australian International Beer Awards and North American Beer Awards.

Pelican Brewing Company was born at the beach in 1996. Here, in front of a rundown old building at the water’s edge, stood three enthusiastic young folks whose thirst for great beer overshadowed their understanding of what it would take to build a brewery. They did it anyway. Thanks to the vision of founding owners Jeff Schons and Mary Jones, Oregon’s only beachfront brewpub became one of the state’s most popular destinations. And now twenty-four years later, Pelican Brewing Company is an iconic beach brand and one of the most decorated craft breweries in Oregon. Pelican has been honored with more than 450 awards including the prestigious 2015, 2016, 2017 Australian International Beer Awards Champion Medium International Brewery; 2014 World Beer Cup Champion Small Brewery; 2013 Great American Beer Festival Large Brewpub of the Year. Why? Pelican brews are playful, but not frivolous. Brewed with purpose, passion and a deep respect for the craft. Pelican operates brewing and brewpub facilities in Pacific City, Cannon Beach, and its state-of-the-craft brewery in Tillamook, Oregon where it brews 40,000 barrels of award-winning beer annually and distributes to six states. Pelican’s vision, its beer and values were born at the beach where the team wakes up each day in a place that reminds them that amazing is possible. Cheers, Fellow Fanatics!