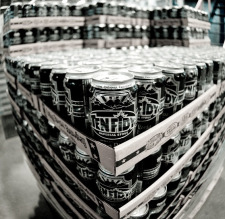 This titanic, immensely viscous stout is loaded with inimitable flavors of chocolate-covered caramel and coffee and hides a hefty 65 IBUs underneath its smooth blanket of malt. Ten FIDY (10.5% ABV) is made with enormous amounts of two-row malt, chocolate malt, roasted barley, flaked oats and hops.

The name of this boundary-stretching beer has multiple meanings–it is what you think, and it isn’t–at the same time.

The CANcupiscent seasonal, which has bulldozed beer lovers everywhere, will be available at your favorite watering holes and retailers and restaurants starting in September. Find it if you CAN.

Following the successful release of Oskar Blues spring seasonal, GUBNA, the FIDY will be available until February 2015 (or until it sells out). Need a holiday gift or a special something to take to that holiday party? Robustly-appealing Ten FIDY could be your answer.

Ten FIDY has been showered with accolades that almost stand up to the size of this behemoth-in-a-can, including:

Ten FIDY is an unyielding, pertinacious beer that requires monster strength to make. This brew is constructed with colossal amounts of two-row malt, chocolate malt, roasted barley, flaked oats and hops. Ten FIDY’s nearly 5000-pound grain bill is just short of 50 percent specialty malts, which are packaged in 55-pound bags and loaded into the mills by hand. The tremendous bags of oats are poured directly into the mash tuns. The oats and rice hulls must be lugged up 20-odd stairs to the top of the brew decks.

Like all our beers, Ten FIDY is brewed at both our ColoRADo and North Carolina breweries and shipped fresh to nearby states. Don’t worry, though, this stout cellars well–recent release parties at both brewery tap rooms offered up 2012, 2013 and 2014 FIDY vintages to clamoring stout enthusiasts.

“Brewing Ten FIDY is unlike any of the other beers we make. We have to mash-in two batches just to get one kettle filled because we only take the most concentrated wort from each mash. It’s a labor intensive process, but this is part of how we make Ten FIDY so unique, rich, and complex,” says Oskar Blues NC Brewery Manager Noah Tuttle.

Ten FIDY is packaged in 12-ounce CANS and sold in 4-pack carriers, as well as on draft at craft beer retailers, growler fill shops, restaurant, bars and more.

About Oskar Blues Brewery
Founded as a brewpub by Dale Katechis in 1997, Oskar Blues Brewery launched the craft beer-in-a-can apocalypse in 2002 using a tabletop machine that sealed one can at a time. In 2008, the makers of the top-selling pale ale in ColoRADo, Dale’s Pale Ale, moved into a 35,000-square-foot facility in Longmont, ColoRADo. The brewery has since experienced explosive growth-packaging 59,000 barrels of beer in 2011 and 86,750 barrels in 2012. In December of 2012, Oskar Blues opened the doors to an additional brewery in Brevard, North Carolina. Together, the breweries packaged 119,000 barrels of beer in 2013, distributing its trailblazing craft brews to 35 U.S. states and Washington, D.C.