(LONGMONT, CO, BREVARD, N.C. and AUSTIN, TX) – Barreled. Bigger. Bolder. Boozier.  That’s what you gotta do if you’re gonna top one highly-rated imperial stout with another. 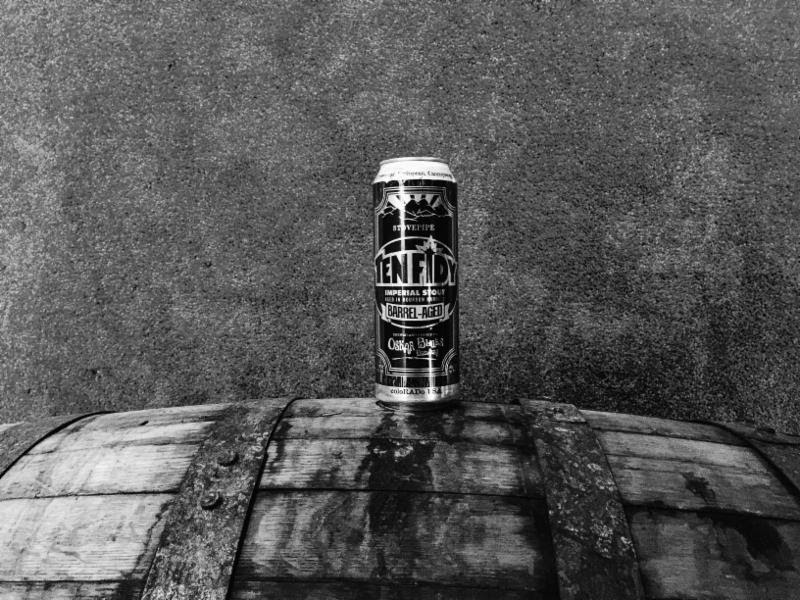 Oskar Blues Brewery took its Ten FIDY Imperial Stout and stashed it in a blend of Kentucky bourbon barrels for a minimum of eight months. The result is a cool and drinkable concoction that gets more complex with each sip.

“Aged through four seasons and from a blend of the top bourbons around, this Ten FIDY has morphed into a monster of cranked up flavor,” said head of brewing operations Tim Matthews. “Espresso, burnt sugar, rich chocolate, and caramel notes are now combined with the vanilla, oak, and bourbon flavors and all have been smoothed out during maturation.”

Barrel-Aged Ten FIDY clocks in at 12.9% ABV and will be available through a limited nationwide release on draft and in 19.2 oz. stovepipe cans. Ask your favorite bar or shop if they’ll be carrying this and/or search our Beer Finder at www.oskarblues.com/beerfinder

Just to sweeten the pot we’re also dropping a TAPROOM ONLY Java Barrel-Aged Ten FIDY (12.9%). Aged just like BA Ten FIDY, but mixed with Hotbox Roasters beans from Central America, South Asia, and Ethiopia. This will be available on tap, plus 19.2 oz. stovepipe and Crowlers to-go ONLY in our Longmont and Brevard Tasty Weasel taprooms during the BA FIDY release parties (details below).

“We took an already ridiculously complex beer and thought a bit more complexity could be fun,” said Longmont Cellar Manager Dennis McShea. “We asked our brothers from Hotbox Roasters to come up with a special blend of beans and roast to compliment the flavors of BA Fidy. We specifically asked for a cold brew that would complement the vanilla and caramel notes from the oak but have the toughness needed to stand next to the bourbon and roast character from the barrel and the beer.”

Both ColoRADo and North Carolina will tap BA Ten FIDY and Java FIDY during these events. Tasters, 10 oz. pours, plus stovepipes and Crowlers to-go will be available. No limit on to-go beer.

Details and RSVP
Tasty Weasel Longmont (CO) – Saturday, November 5th (12-8pm)
Details and RSVP
OH! Before we forget…. Let’s get ready to RUM-ble!
In December we’re releasing two rum-barreled brews in our ColoRADo and North Carolina taprooms ONLY.
Stay tuned for Rum Barrel-Aged Ten FIDY and Rum Barrel-Aged Death By Coconut to drop in Brevard on December 12th and Longmont on December 17th. On tap, in 19.2 oz. stovepipes, and Crowlers.
Booyeah. There is no other place on the planet to get these except from either taproom.
About Oskar Blues Brewery
Founded by Dale Katechis in 1997 in Lyons, Colorado, Oskar Blues Brewery launched the craft beer-in-a-can apocalypse with their hand-canned, flagship brew Dale’s Pale Ale. Today, Oskar Blues is one of the fastest growing breweries in the country and operates breweries in Longmont, Colorado and Brevard, North Carolina, and now Austin, Texas, while producing 192,000 barrels in 2015. The original canned craft brewery continues push innovation with creations like The Crowler, Hotbox Coffee Roasters, B. Stiff & Sons Old Fashioned Sodas, Oskar Blues Fooderies, and REEB Cycles. Oskar Blues is available in all 50 U.S. states, Washington, D.C., parts of Canada, Puerto Rico Sweden, Spain, Chile, the Netherlands, Belgium, the U.K., Ireland and Australia.
In 2013, Oskar Blues founded the CAN’d Aid Foundation, a 501(c)(3) nonprofit public charity that offers grassroots grants to those making a difference in the areas of community, the environment, music, and more. In 2015 alone, CAN’d Aid partnered with 52 organizations and provided nearly $400,000 in charitable contributions, bringing the total amount raised $1.9 million to date. CAN’d Aid’s “do-goodery” efforts include:
Towns – building strong communities
Tunes – for your eyeholes and earholes
Treads + Trails – get outside and get after it
Love Yur Mama – save the blue marble
To keep up with all things Oskar Blues, visit http://www.oskarblues.com.